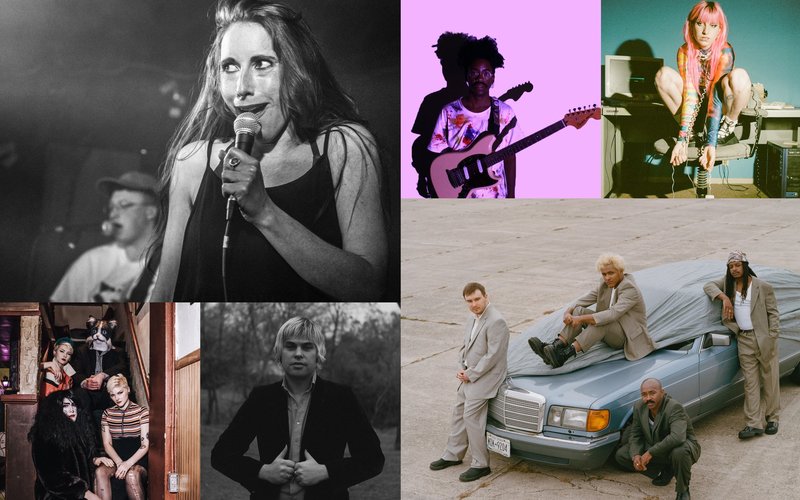 This week, the streets of Boise will be overflowing with artists and fans (alongside the many service industry workers that will be needed to accommodate the former) as Treefort Music Fest kicks off its tenth year. If it seems like the last one just happened, well, it did. But we were owed a makeup fest after Covid temporarily halted things and, personally, another Treefort couldn’t come soon enough.

With nearly 500 artists from 17 different countries playing over the course of the five-day fest, the decisions of who to see can be overwhelming. There are the obvious artists that the majority of us will likely prioritize – Kim Gordon, Durand Jones, Snail Mail, you know, the ones in the massive font – but what about all those teeny tiny names at the bottom of the flyer? I’m talking about the ones that reside in the paragraph 30 lines deep and you need to zoom in multiple times to even read.

When there are so many artists to wade through and seeing one band often means skipping another, which sets do you choose? Well, here are 10 bands that, in my extremely humble opinion, are worth adding to your schedule. With their placement in the second line of the teeny tiny font section, IAN SWEET are nearly middle font but have large font positioning in my heart. I’ve long been a fan of Jillian Medford’s dramatic and playfully childlike vocal delivery of very adult and moody scenarios. This discord, along with Medford’s generous use of expletives, makes her songs read more honest to me and her latest record, 2021’s Show Me How You Disappear (mixed by Chris Coady who’s worked with a long list of heavy hitters such as Yeah Yeah Yeahs, TV on the Radio, Grizzly Bear, Beach House, and Blonde Redhead) was a favorite of the year for its ambitious scale and intense vulnerability. This Austin-based band has the John Dwyer co-sign, which alone should be enough incentive to check out their set. But if you must know more, the band makes sprawling, kaleidoscopic psychedelia that was perfected on their masterpiece of a record Music Is Dead but probably translates even better in a live setting. Make sure you’re hydrated and wearing comfy shoes because I imagine this set is one you won’t be standing still for. This is a band that I just recently saw a few trusted sources on Twitter recommend and, based on their incredible 2019 debut It’s the Tips and the feverish cult following the Boise band has in their hometown, I have been convinced. The trio of Angela Heileson, Rachel Couch and Ivy Merrell make danceable angry punk songs that have just as much fury as fun. Get to their set early because they’re only playing once and it sounds like the locals will be coming out in droves for this one. Continuing on with more furious femme-led punk, Spokane’s Itchy Kitty started out back in 2013 as a sort of joke band, with the entire content of their mangled punk music revolving around cats. Since then, they’ve somewhat ditched the cat shtick (their guitarist still wears a cat mask and is called, appropriately, Catman) and become respected leaders of the Spokane punk scene. Their hyperkinetic glam rock take on punk caught the ears of none other than Boise’s unofficial mayor of music, Doug Martsch, who brought the band out on the West Coast leg of Built to Spill’s tour this winter. For those in the know in Seattle’s underground scene, this band has become a word-of-mouth must-see over the past few years. Bold and brazen, a Rachaels Children set is performance art perfected as frontwoman Ariel Burke saunters across the stage giving menacing glares, daring anyone to question her place on it. I once heard a story about her pulling her tampon out on stage and throwing it into the audience, but that could just be lore. Either way, this band is going dp something at their set that I can guarantee you won’t forget. Hardly a new name on the scene, Snotty Nose Rez Kids are hip hop stars in their Canadian home country with nominations for both the 2018 and 2019 Polaris Music Prize, the Juno Award for Indigenous Music Album of the Year in 2019, and for Best Hip Hop Album at the 2018 Indigenous Music Awards. Fresh off their first time at SXSW, the duo is poised for an American breakthrough any moment now. See them before that happens. This is another Seattle band that’s very much if-you-know-you-know. I’ve been catching their sets for years now and no matter how many bands are on the bill, after every set, without fail, all anyone can talk about is how incredible the Flesh Produce set was. The three-piece make highly original and thoroughly engrossing noise rock that fuses glitchy digital bleeps with sludgey punk for a caustic fever dream of an experience. While I haven’t even departed for Boise yet, I’ve already come across what could possibly be my favorite Treefort discovery. Piqued by the name, I knew Blvck Hippie were probably for me when reading their self-description as “Sad Boy Indie Rock” and “if you’re a fan of The Strokes but like your songs a little more moody.” Sign. Me. Up. The Memphis band is working hard this week, bringing their angular guitar riffs and emotive storytelling to three different stages over the course of the festival. 2021’s big breakthrough from the Tacoma scene (with a little help from KEXP’s Martin Douglas), it’ll feel triumphant to see Enumclaw - who had never even played a live show when they first blew up online - on a festival stage. Now that they’ve had some time on the road, opening for Nothing and playing a string of sets at SXSW, I’m curious how The Best Band Since Oasis’ live show has progressed and am stoked as hell to belt out, “It’s always too much too much too much or it’s never enouuuugh!”