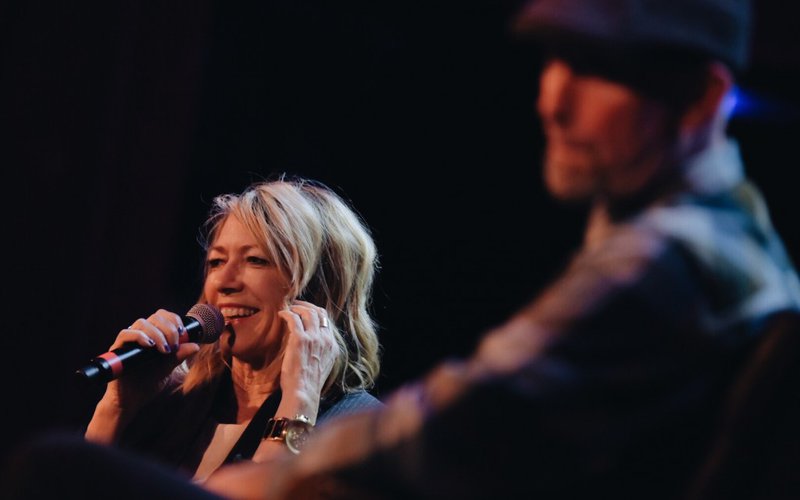 On her nationwide tour, the former Sonic Youth bassist had different interviewers in each city: drummer extraordinaire Jon Wurster in Chapel Hill, Carrie Brownstein in San Francisco, Aimee Mann in Santa Monica. Here in Seattle, we got Bruce Pavitt, co-founder of Sub Pop Records. The choice makes perfect sense — in 1986, the band contributed the track "Kill Yr Idols" to Sub Pop 100, the label's very first release, establishing a long-running relationship. Sonic Youth had huge success in Europe and brought Mudhoney along for a 1988 tour, which Pavitt credits with helping giving grunge worldwide recognition. 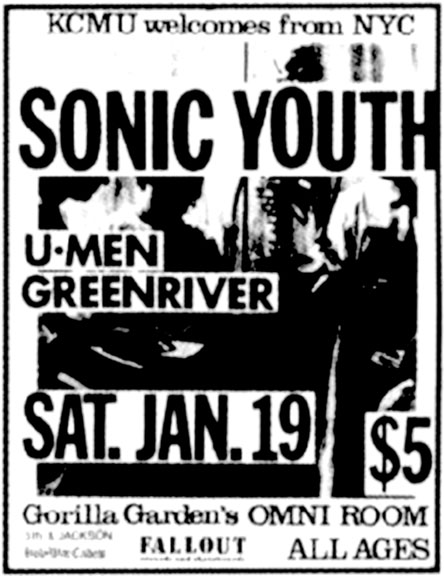 Pavitt talked about the very first time Sonic Youth came to Seattle (for which I found the above flyer — check out the KCMU welcome!). Thankfully for Seattle, he said Kim and her now-ex husband Thurston Moore talked him out of moving to New York. Kim quipped that Sonic Youth were "an honorary Seattle band."

I was all aboard when Pavitt asked her about her '90s fashion line, X-Girl, but Gordon admitted she was pregnant with her daughter Coco at the time and didn't remember a lot about it. Then, Pavitt dug right in for dirt on Courtney Love. Gordon told the story about how Love punched Kathleen Hanna in the face at the 1995 Lollapalooza stop at The Gorge, but added, "All of this is already public domain." She cited "Come as You Are" and "Negative Creep" as a couple of her favorite Nirvana songs. But then, Pavitt threw the curveball: "So, who's your favorite Muppet?"

Kim took it all in stride. "I didn't really watch that show..." (awkward silence as Pavitt continued to look at her expectantly.) "Um, Kermit, I guess?"

Sadly, after that, the conversation began to unravel a bit. The microphone was handed down to the audience for a community Q&A. While I was happy to see so many women reaching for the mic, I was also kind of thrown by their questions. "Do you spell Riot Grrl with two Rs or three?" "Who are women you think are doing it right?" (Me, in my thoughts: "Doing what right?") Kim gamely replied, "Amy Poehler, Amy Schumer, Aimee Mann... there's some more Amys out there."

Pretty soon, exasperated sighs and snarky tittering were louder than the questions being asked themselves. Audience members were twitching in their seats, rolling their eyes, and checking their phones for the time. Throughout it all, Kim maintained her graceful composure. Her answers were brief, but never derisive. I couldn't stop thinking about how much she reminded me of Patti Smith with her leather pants and motorcycle boots and thoughtful, crinkled eyes.

The question of Gordon's divorce from Thurston Moore was the elephant in the room; in typical Northwest fashion, no one dared ask about him. Pavitt made an offhand joke about Moore, but Gordon shut him down pretty quick, saying, "Read the book." In fact, the evening was so sorely lacking in insight that I did buy the book... and wasn't that the point? Maybe it was a successful night after all.

Dear @KimletGordon I'm sorry those people in Seattle asked you so many terrible questions. But that Michael Gira one was funny. Love K ❤

@KimletGordon I'm so sorry. You are an amazing talented artist and deserved better questions than that. Thank you for coming to Seattle.

I am still angry about those questions from the audience at the Kim Gordon book event last night. Muppets? Seriously?

Girl in a Band is out now via HarperCollins. You can follow Kim Gordon on Twitter here. 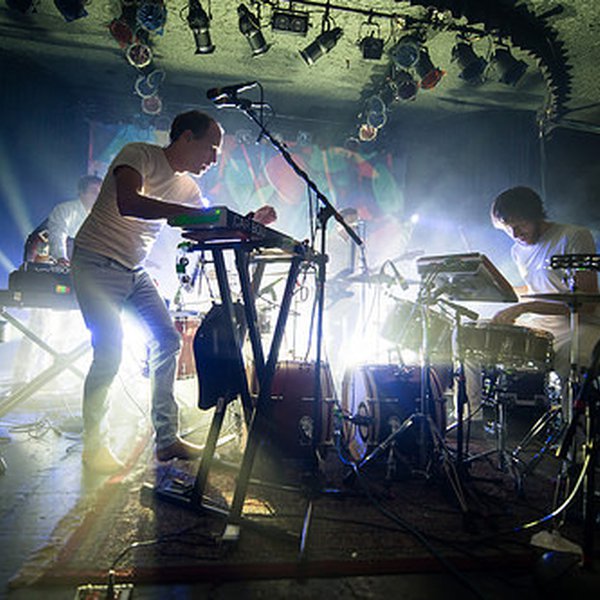 Live Review: Caribou with Koreless at Showbox at the Market 3/4/2015

Truly, we can't do without you, Dan Snaith. With a discography 15 years deep and only getting sweeter with time, any chance to see Snaith in any venue under any of his monikers is an incredible blessing. In fact, I bet he could have sold just as many tickets throwing a DJ set as Daphni or even ju... 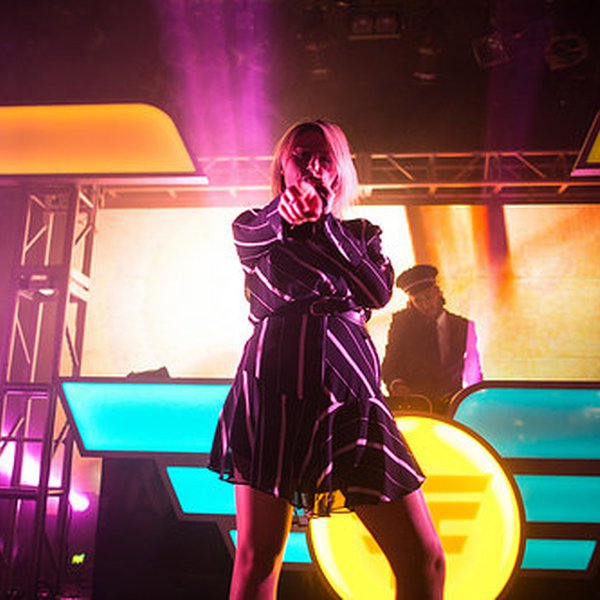 Live Review: Flight Facilities with Beat Connection at Showbox at the Market 2/21/15

There's this interview reel with Rod Serling that plays over the intro of Flight Facilities opening dance number "Two Bodies" on their debut LP, Down To Earth. Here, the famous Twilight Zone narrator reconciles the ideas of commercialism and creativity as the house beat fades in and Emma Louise s...