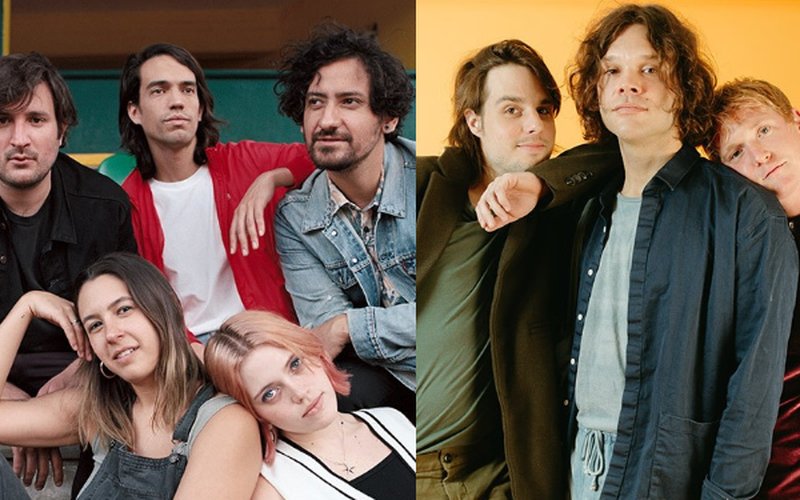 “Tonight (Could Be the Night).” “Waiting for Tonight.” “Somewhere Tonight.” “Tonight, Tonight.” I’m sure the joke has been made somewhere on Twitter about the overuse of “tonight” and the concept of being forever young in pop songs but there’s no denying the appeal of a promise of an incredible night to get yourself through the day. But the night can wear multiple faces. What, at first, can seem like an opportunity to set yourself free from the shackles of adulthood can easily be warped into fear, regret, loneliness, and utter darkness.

This is how I see the two versions of “Elektro” presented today. The original, off Mexico City five-piece Petite Amie’s 2021 debut self-titled full-length is a dreamy, shimmering, psych-pop track made for the early hours of the evening post-sunset. You’re on your way to meet up with friends or pouring your first drink at home without a care in the world, just relieved the day is over and excited to see what the evening brings.

”J’attendais le soir /Je cherchais une histoire,” sing Aline Terrein and Isabel Dosal. Which in English translates to “I was waiting for the evening /I was looking for a story.”

Fast forward a few hours and we find ourselves at Okey Dokey’s new remix of “Elektro.” Immediately we can see that the night has taken a turn. Perhaps we went over our drink limit and did something we’re not exactly proud of. Or social anxiety got the best of us and our mind is spiraling down a deep dark hole. Either way, we’re not in a good place. Sharp ‘80s indebted synth beats and pitched-down ghostly vocals imply a gritty scenario but also one where we’re not quite heading home yet. There’s only tonight.

Okey Dokey’s interpretation of the track is just one of three versions for an upcoming remix EP out tomorrow, February 10th via Park the Van. Los Angeles’ BOYO and Argentina’s Lucia Tacchetti join the Nashville trio to make this project a global collaboration. Here’s what Petite Amie had to say about the song:

“The Okey Dokey remix is Elektro’s darker twin (in the best possible way). It instantly absorbs you and makes you feel like the main character in a psychological thriller or an action movie. It’s amazing to hear an other artist’s take on our song, and how it has an entirely different sort of intensity than that of the original track.”

“I wanted to turn the song on it’s head,” says Okey Dokey’s Jeremy Clark. “So I muted everything but the vocals. Pitched those down to a slower tempo and started there.I wanted to keep it simple so I just based everything around that one bass synthesizer line, and sort of let everything just fall into place naturally.”

Okey Dokey just dropped a cover of The Walkmen’s “The Rat” and released their third studio album One Upon Once Time in 2020, which was also a highly collaborative experience that saw contributions from Dave Harrington (Darkside), Grizzly Bear‘s Chris Taylor, and members of My Morning Jacket and the Shins. They’re currently on tour and will be playing Treefort Music Festival in Boise on March 24th.

Petite Amie, founded by Carlos Medina of beloved Mexico City indie band Little Jesus, played an incredible in-studio set for KEXP back in November when they were in town to play Freakout Festival. Below, listen to Okey Dokey’s version of “Elektro” and watch Petite Amie’s KEXP in-studio performance.