If anything defines Latin America, that’s the common sense of union. In this list — chosen by members of Faro, an alliance of cultural media across nine different countries in Ibero-America — we share a selection of recent collaborations between artists from different countries which reflects a collaborative and versatile spirit, nourished by sounds and genres of all the continent. There are also unexpected unions which take the listener to a whole new world to discover. As if they were organic links, a key to new discographies to listen to, these songs celebrate the artistic union without borders.

As the pandemic took over the world, many people decided to escape from the cities to find peace and solitude somewhere closer to nature. Argentine singer-songwriter Manuel Onís chose to spend the beginning of quarantine at the countryside, a couple of hours away from the city of Buenos Aires. Far from the urban noise, he found the inspiration needed to write and record his upcoming third solo work.

"Pangolín", his most recent single from that album, is a collaboration with Andrea Echeverri, the singer from the legendary pop rock band from Colombia Aterciopelados. This hypnotic track has a way of burning at its own pace, as if slowly setting the stage for a mystical ritual devoted to the moon and all the enigmas the night brings. The song takes its title from the solitary nocturnal mammal that defends from predators using its hard skin covered with scales.

Lila May is a Brazilian singer-songwriter who started recording her songs in 2019 but who had been performing in different stages in Brazil, Argentina, and Chile — actually, stages, streets, and wherever else she feels like her music would fit. Her songs are inspired by Latin American folk music, Andean rituals, and Afro-Brazilian culture. So, it should not be a big surprise that her second single has a very special guest: legendary Colombian singer Totó La Momposina.

Totó and Lila embrace the idea of different generations of strong women and celebrating the feminine very essence. The song was recorded when Totó last came to Brazil but it took a while to be released. The musicians of both singers’ bands took part in this very unique arrangement. Although acoustic, it is an extremely vibrant song, which has an equally vibrant video, where both ladies’ joy is visible and contagious.

How do songs change and grow as they are shared with other people? According to the Chilean artist Camila Moreno, 'Déjame' expanded by putting it in the hands of Ximena Sariñana and Lido Pimienta, her traveling companions in this single, which is part of Rey, her latest album and one of the most impressive released on Chile during this year, to date.

"Like Haim passing through the altiplano." This is how Moreno once referenced the song and as strange as it sounds, it’s also accurate. From electronics and pop to folklore, without leaving any genre to move on to the other. Suddenly there’s a nebula built into which a seven-octave measure and a charango burst in, changing the direction of what you expected to hear. So, we transform into pudúes running free through the Andes Mountains, while the chorus in "Déjame" seems like a mantra in several ways. It may be the desire for escape and flight. It may be the desire to want to be better for the person you love. And, something that Camila told us in May, just for the premiere: "It’s also an ironic competition with the archetype of patriarchal man, I tell him that I can do it better."

At the age of 15, Andrekza left his hometown in San Antonio de Los Altos, Venezuela, and began a journey around the world to unravel the codes of his musical career. She lived through the Venezuelan graffiti and rap scene, she settled in Los Angeles to become a photographer and creative director. There she premiered her first songs in 2020 and it was booked by the Latin division of the seal of Steve Aoki, Dim Mak, and Fuego. Also, she made a couple with the son of the Colombian diaspora in New York, Gabriel Garzón-Montano, and released “Tuve,” a single included on her first EP: Cassette - Lado A.

Montano, who in 2020 released Agüita — one of the best albums of the year according to Time and according to Shock and according to anyone who listens to it full — put his voice in this experimental dembow, with a dry beat and a melody full of hidden jungle sounds .

“Mundo Nuevo” is the third single from Mendó (Caracol Records, 2021), the ninth studio album by Cuban composer, Alex Cuba. In this song with Mexican composer, producer, actress, and anthropologist, Lila Downs, both artists come together to deliver a duet full of sweetness and sensitivity. This magical song came to Alex in a dream as both lyrics and music, travelled through the unsuspected paths of the subconscious.

The iconic sound of Mexico’s son jorocho [a regional folk musical style from Veracruz] that Lila brings melts with Alex’s experimental Caribbean sound, bringing together two very close and exotic cultures to give that much needed hope to the world in these dark times. If you like listening to the sound of birds in Spring and also enjoy nature and the simple things of life, this song will become a spiritual mantra for you, a sort of healing medicine for your soul.

Currently, both groups are references on the Ibero-American indie scene: El Mató with more than fifteen years of life and Carolina Durante with her clear positioning as a representative of the new generation of Spanish rock.

So, it comes as no surprise that in June this year they got together to cover a version of "Espacio vacío", a hit from the '80s in Spain composed by the band Séptimo Sello. The song was released as a vinyl single on the Sonido Muchacho label.

Now, a few months later, comes the videoclip of this stellar Spanish indie collaboration. Directed by Carlos Saiz and starring Manuel Egozkue, the audiovisual piece is an ideal occasion to rescue a very good pop rock song from the 80s in the voice of Diego Ibáñez and Santiago Motorizado. And to see how good they sound together.

Paulina Sotomayor's solo project, named Pahua, has been a project that we have not lost track of with the singles featured on her EP Ofrenda and several collaborations with more artists of other countries. At the end of August, she presented a song that comes with a lot of feminine awareness and that will be part of the next EP.

This collaboration was created between Pahua's home studio in Mexico City and the Cuban music studio of Yaite Ramos Rodríguez, better known as La Dame Blanche — this studio located in Paris — and presents an organic fusion of hip hop with some peculiar flute beats. This track was produced and mixed by Marc Damblé a.k.a. Babylotion in Paris, France, and mastered in Costa Rica by Ricardo Bernal Valle. Pahua tells us a bit about the song: “Sometimes we get tired to make someone else happy. ‘La trampa’ is a call to do the things we want without fear of anything or anyone.”

A sonic pop explosion — that comes from Peru and Mexico — in a single song. A song that releases a very deep side of the confessed and talented Peruvian musician Adrián Bello. That edge rarely shown, full of dance, sensuality, and fun.

For the track, Bello found an excellent and talented partner, a musical ally, the multifaceted Mexican artist Ximena Sariñana. The result: an interesting combination, thanks to the constant rhythm of funk and R&B, very well complemented by the joyous chemistry lived from start to finish.

In addition to that rhythmic and vocal mix, the song speaks of human relationships in general and love in all its forms. And what better way to express that intense open connection to experiencing life on another level, holding on to this sense against everything. Also do not leave out the production of the prominent producer David Chang, who is also behind the successes of national proposals such as We The Lion, Cristina Valentina, Nia Vanie, among others, being a successful hit to remember.

Despite being a little over a year after its premiere, "Explosion" is still so fresh, entertaining and elegant. Worth dedicating to that special person who gives life to that vital chemistry that many times we do not want to end.

Ulises Hadjis and El David Aquilar – from Venezuela and Mexico respectively – created Núcleo Distante in 2018, a collective formed by independent Latin American musicians with the purpose of breaking the borders and coming together in songs. The result was an album, Notas de Voz, created between Whatsapp exchanges, and a mini festival in Montevideo, Uruguay, with some of the artists.

The ramifications of that seed continue growing until today. That is because Hadjis invited Florencia Núñez, Uruguayan delegate of collective Núcleo Distante, to participate in one of the many collaborations that define his most recent record: El Mundo y La Nada. The song is “El Mundo Entero,” a joyous and lively composition that describes in detail the vast world that surrounds their object of desire, but reveals almost too subtly the sadness of not being able to be part of it.

Faro is an Ibero-American musical and cultural media alliance, born in the middle of the pandemic, and has since become a trusted global voice.  Through their joined forces and resources, Faro intends to promote the visibility of artists and creators throughout Ibereo-American. 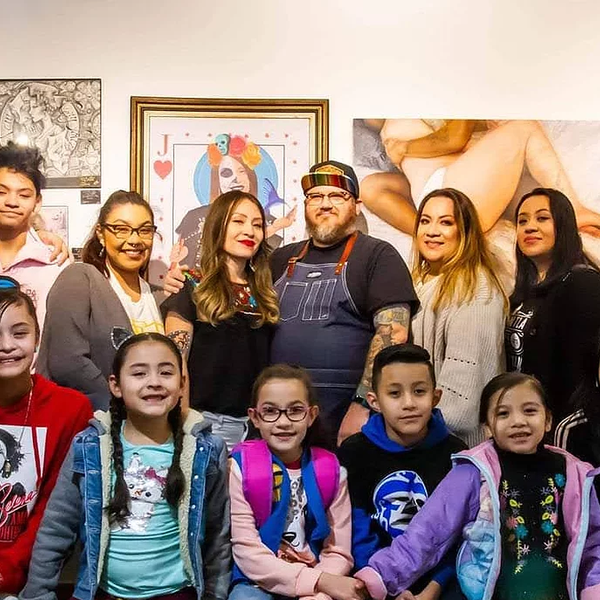 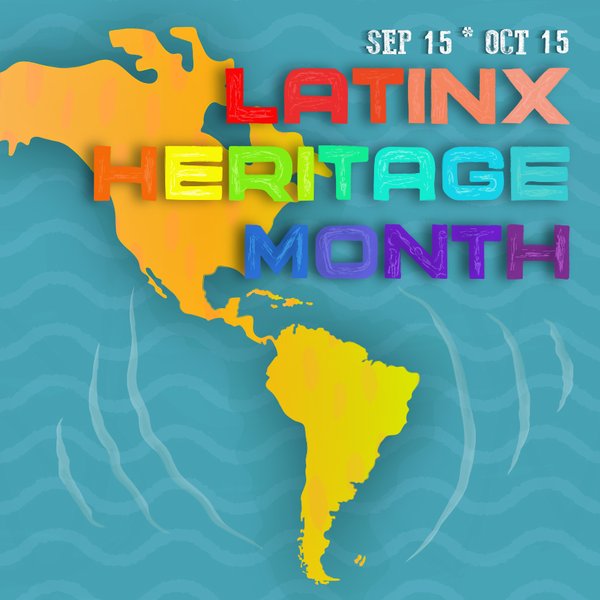 Over the course of a month KEXP will celebrate not so much the “heritage”, nor the fundamentals of “Hispanic”, “Latino” or “Latinx”; but rather the celebration of a month of exchange, of sharing/giving airtime with/to the voices that are building the new alternative music scene in Latin America. 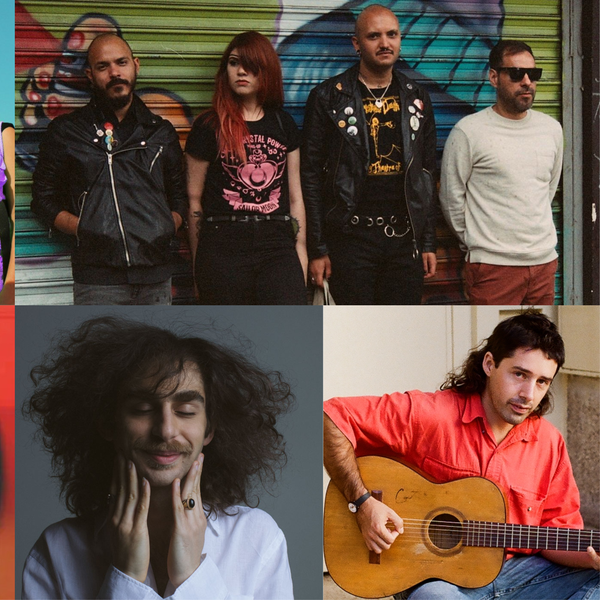