When he was starting out, Jeremy Haywood-Smith — who records under the pseudonymous name JayWood — would post covers of songwriters he admired like Mac Demarco and Craft Spells to his SoundCloud. Now, the Winnipeg, Manitoba native stands alongside those artists on the Captured Tracks roster, as the esteemable Brooklyn-based label will be digitally releasing his latest EP, Some Days, on April 23rd.

"It's absolutely surreal to be a part of the current roster," Haywood-Smith told KEXP. "I always have a bit of a laugh when I look back on my older recordings, but honestly, so many of the artists on the label at that time were a huge inspiration for pursuing the DIY style of songwriting. The younger version of myself is internally jumping around from excitement for sure, but I'm also just trying to keep it as cool as possible. Everyone at Captured Tracks has been so welcoming, and it’s been incredible to get to know everybody. I have been keeping up with the label and their artists since I first started writing songs under JayWood, so it feels like the best kind of full-circle moment for this project."

In those early days, Haywood-Smith was writing what he describes as "sad jangle-pop songs" from his bedroom studio. "When I was first writing songs for JayWood, it felt like I was just trying to make songs that sounded like every other band at that time," he admits. "As much as I loved the styles and sounds of artists in 2014, it didn’t come naturally for me."

Instead, Haywood-Smith began incorporating elements of funk, psych, and jazz to his sound, all present on his 2019 self-released debut LP Time, an ambitious concept album detailing his coming-of-age story, sequenced to sound like you're scanning a radio dial, complete with in-between moments of static and banter. "I did a lot of experimentation after I finished the original version of Some Days; in production, blending genres, song structure, and instrumentation. I wanted to figure out what sounds and influences represented what I wanted to share. Through this process, I realized that because I'm inspired by so many different aspects of music, that committing to one genre didn’t make sense for me. I think that's when the 'alternative' sound really started to shine through. It allowed me to borrow from different styles while maintaining a cohesive sound." 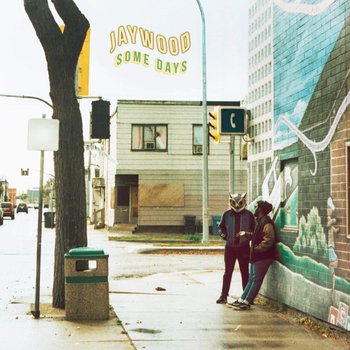 Yes, as alluded to, the songs on the forthcoming EP Some Days were actually written and originally recorded in 2015. But. as they say, time and distance bring perspective, and as he re-recorded the tracks for 2021, he was able to bring a sophistication to his earlier efforts.

"It was a trip dusting off these older songs. At the beginning of 2020, I felt myself living in a state of nostalgia. I decided to revisit the older tracks because, at this point in the Pandemic, I felt like moving forward wasn’t entirely possible. It gave me a moment to look back on JayWood and check in with my younger self," he reflects. "While re-recording, I wanted to remain true to where I was initially coming from creatively, while incorporating the growth I had both technically and as a songwriter in the past seven years. I have been described in the past as a maximalist, and so part of the re-recording process included controlling those impulses to do more, and trying to get back to the core of the song. Reading back through the lyrics was kind of like looking through an old journal, you know it’s you, but there’s still a sense of distance there."

Part of what makes JayWood's sound so distinctive is that infusion of outside influences, in typically Black-dominated genres of funk and jazz, to his traditional "indie" sound. Earlier this year, Haywood-Smith hosted a virtual chat with Matthew James-Wilson, Editor-in-Chief of FORGE. Art Magazine and Creative Director at Danger Collective Records. The theme of the discussion was "Discussing the Hurdles Black Artists and Workers Often Face Within Indie and DIY Art Communities." (NOTE: you can watch their conversation here.)

"...being Black has never stopped me from creating the music I wanted to create."
— JayWood

"I loved hosting this discussion with Matthew," he tells us. "It’s clear that he has a lot of knowledge to share about not only being Black in the Indie music scene, but also the history of Black music and how that history influences today’s representation of Black artists. He’s inspired me to learn more about my own roots, musically and on a larger scale."

"In his article for Pitchfork — "What It's Like to Be Black in Indie Music" — Matthew says, 'Even if the ideals of independent music are relevant to Black listeners, it can be hard for them to make the leap into participating in the scene if they don’t see themselves represented in it.'"

"This definitely resonated with me — from the showbills I’ve been on so far, it’s incredibly rare for me to play alongside bands with other Black people in them. I’ve had moments where I have felt the imposter syndrome creeping up, and I have thoughts like, 'Am I even good? Or am I just here to make them look good?' The last thing I imagine a lot of diverse artists want is to be tokenized. It’s something that doesn’t go unnoticed when a lot of the main supports available to me are from predominantly white-led organizations. At the very same time, I’ve noticed when organizations that have contributed greatly to my growth as an artist, have been doing the work to expand their diversity initiatives, including Manitoba Music, Canada Council for the Arts, and FACTOR."

"All that being said, being Black has never stopped me from creating the music I wanted to create. There have been times where people just assume I am a rapper or a D.J., but moments like that only motivate me to make sure that the music I am making is authentic to the styles that I am inspired by at the time. One of my goals moving forward is to help increase Black representation in the Indie space. I would love the opportunity to encourage young people of colour who also feel connected to alternative music. I hope with the release of the Some Days EP, I’ll have more and more chances to meet and connect with BIPOC artists in Indie music and beyond."

Haywood-Smith describes today's premiere as a song about "feeling that push/pull of moving forward versus staying comfortable." We asked about how that theme plays out in the music video.

"This video was a massive undertaking," he shares. "It’s been a goal of mine to take the reins more on the visual aspect of my storytelling. I chose director Eric Peterson and cinematographer Jesse De Rocquigny of Dog Days Film Co, specifically because of our ability to collaborate together on the vision."

"A lot of the discussions early on between Eric, Jesse, and I were about how we could represent feelings of confusion and crisis of identity while maintaining a cohesive storyline."

"The theme of 'push and pull' that is present throughout Some Days, appears in the storyline of each of these characters. You witness them try to overcome obstacles if only to end up where they started. It was great to have these connecting storylines because it gives folks a chance to meet the band in a new atmosphere."

"It was important to me that we captured the juxtaposition of myself and these different tendencies. Some days I feel like the ‘doer’, and other days I feel like an observer. Wherever that takes you, you’re heading back to yourself at the end of the day. The crew understood what I wanted to achieve visually, and they brought a lot of inspiration to the artistic and technical aspects. I really hope folks enjoy it, I can’t wait to show y’all what next!"

The Some Days EP will be released digitally on April 23rd by Captured Tracks.