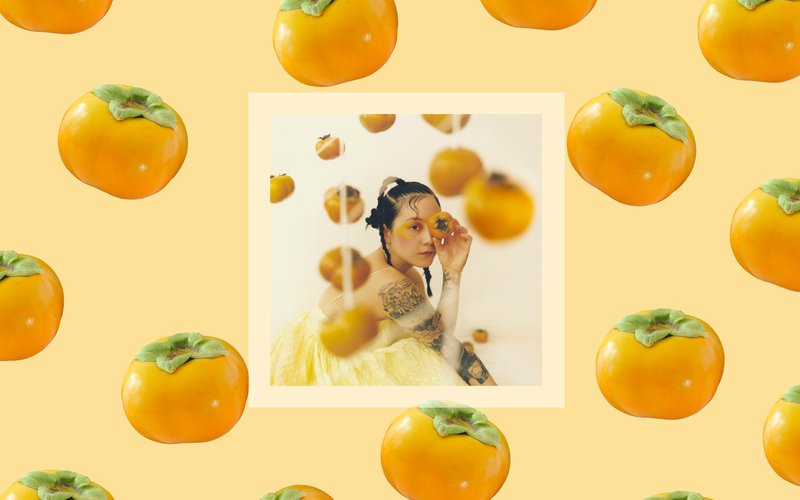 KEXP is counting down the best records of the year with our annual Top 90.3 Countdown. Ahead of the countdown, KEXP staff make the case for some of their favorite albums from 2021. Make sure to vote for your favorites by December 10 at 6 PM PT and tune in to hear what makes the list on December 17.

In our second year of an ongoing global pandemic and continuing crises, embracing happiness feels radical. This isn’t to say that it’s wrong to feel joy in this ever-present turbulence – that we should withhold ourselves from feeling anything other than existential dread and misery. Believe me, I’ve tried. But it’s difficult. When we’ve seen how atrocious the world can be and how terribly we treat each other, how are you supposed to take in even life’s simple pleasures?

Joy is not absolute. Nor is it all-consuming. Despite knowing better, I feel like I always have this one-dimensional image in my mind of what it would mean to be a “happy person.” Never sad, doesn’t stress, has their shit together, probably smells good. It’s such a laughably narrow definition stripped of nuance. I have to believe I’m not the only one who buys into this false narrative or projection. It’s hard to internalize that the presence of joy doesn’t mean the absence of sorrow. A year like 2021 feels exemplary of just how complicated joy can be.

Coming out of 2020, where every moment felt like the end of the world, there was a feeling of “how much worse could it get?” Call it perspective, denial, what have you. That a “more hopeful year” began with an attempted violent overthrow of the government is a pretty good barometer of how bleak things have been. Yet still, there were glimmers of hope. Vaccines began to roll out! Families and friends reunited! Restaurants began to re-open! Live music came back! And then… Virus variants. Continuing injustices. New conspiracies. Less decency. More and more uncertainty.

This is a long way of getting to Japanese Breakfast’s latest and arguably best album, Jubilee. After two beautiful records and her New York Times bestselling memoir – Crying in H Mart –all ruminating on grief, songwriter/author Michelle Zauner vocally sought to embrace happiness with this album. You feel this before even dropping the needle. On the cover, she kneels in a yellow dress amongst dangling persimmon fruit. It evokes spring, summer, sunshine, bliss. The brightness of the cover certainly reflects an upbeat ethos. While there are transcendent, gleeful moments on Jubilee, Zauner’s reflection on happiness explores its complex, varying shades.

Jubilee opens with a spirited, symphonic surge of light with "Paprika." She seemingly waxes poetic about how astounding it is to be able to create and be heard, a love letter to the very act of being a musician. Even still on the bridge, she confesses, “But all alone, it feels like dying/All alone, I feel so much.” Then the record bursts into its defining moment – and possibly the song of the year – “Be Sweet.” The first single from the record, “Be Sweet” is pop music at its best. Deliriously catchy, celebratory, and endlessly repeatable. And like so much great pop music, it masks its darker themes in upbeat instrumentation and ‘80s Teen Witch pastiche. The words “Be Sweet” aren’t so much a proclamation as much as a demand. She spends the verses pleading with a toxic partner to do better, to treat her better. The chorus feels so triumphant and blissful even as she draws out the phrases, “I want to believe in you, I want to believe in something.” And like so much great pop music, it works even if you’re aren’t listening closely. When she sings “Be sweet to me, baby,” its exuberance is intoxicating. You find yourself singing, shouting along; consumed by the melody-induced endorphin rush.

Then there’s the sweet and nostalgic ode to teenage love in “Kokomo, IN.” The synth-pop soul-searching of “Slide Tackle.” The apocalyptic, patriarchal takedown of “Savage Good Boy.” I don’t want to play-by-play everything here, but all to say that way Zauner balances emotional contrast within each song is remarkable. And still, this album that centers on happiness goes even further into darkness. Grief shows itself unfiltered on “In Hell,” painstakingly detailing watching someone beloved die – “Hell is watching someone to love and I can’t have you.” Among her many talents, Zauner’s writing on loss is uniquely cutting and empathetic.

When reading Crying in H Mart, my heart broke again and again. The book intimately details Zauner’s processing of losing her mother to cancer and reflecting on her own Korean identity in the wake of loss. I thought I might cry through the whole thing, but it wasn’t until near the end that the tears came for me. There’s a scene where Zauner talks about playing a show in Seoul, reflecting on singing songs about her mother, wishing her mother could have experienced it. And she walks outside the venue to see crowds of fans clutching copies of Psychopomp with her mom’s smiling face on the cover. It’s such a beautiful, cathartic scene. The pain is still there, but also a sense of pride and thankfulness. (Inversely, “Be Sweet” is the song on Jubilee that makes me cry the most. Funny how that works).

Two months ago my grandmother died. Another death from COVID-19. But it wasn’t “another death.” This was my grandmother. One of the people I hold closest in this world, a well of unconditional love, someone who I know for certain made me who I am today. She was one of my best friends and I could never imagine my life without her. The next day, I found myself looking at COVID death statistics for her county and it felt so numb thinking of her as just a number. A number someone might scroll past while drinking their morning coffee and think nothing of. I wonder how many times I’ve done that for the over 5 million recorded deaths. It’s staggering and almost impossible to comprehend, but all too real when it finally reaches someone you know personally. It’s paralyzing once you reach that realization.

I spent days crying. All I wanted to do was wear my stupid, comfortable Top Ramen sweatpants and hide from everyone. But within days of her death, I was set to officiate my sister-in-law's wedding. I remembered grandmother loved weddings, how she once worked doing bouquets and floral arrangements professionally. Though I knew I would not back out, the idea of feeling any of the joy that comes with a wedding felt so wrong. Even up until the ceremony, I would sneak away to find a moment to myself to look at photos of her and cry in solitude. And yet there still was so much joy. The swell of love and pride seeing two people I adore professing their love to one another, the gratitude and honor to be asked to take such a role. Things I’d reflect on that evening, staring at the pink sky over the Seattle skyline.

Exactly a week after my grandmother’s death, my daughter was born. I don’t want to tire you with the same cliches of children being bundles of joy and your capacity to love growing more than you ever expected; just to say that they’ve been true to my experience. I marvel at her every day. Her smile melts my heart. Her little coos and big eyes looking up at the world always make me smile. When I hold her, I feel overwhelming joy. For a minute, it felt like maybe all that pain I was feeling was gone. My love for my daughter has certainly not waned, but over time I started to realize all that hurt and grief never went away.

One night a few weeks ago I got “nap trapped.” After she had been restless I’d finally got her to sleep but found myself sitting in a chair too scared to move for fear of waking her. So I just sat there for an hour with only her and my thoughts. I remembered how much my grandmother wanted to meet her. My grandmother had been sick prior to Covid, but every family member attested to me that the thing keeping her going was meeting her great-granddaughter. Looking at our baby’s perfect face, I couldn’t stop crying. So happy to have her here, devastated for who was not. I realized that one could not replace the other. Grief isn’t just plastered over and forgotten, no matter whatever joy enters your life. The two coexist until the grief gets easier to live with.

And that’s what Jubilee represents to me. It’s been a heavy two years for everyone. The loss has been immeasurable, almost inconceivable. Some have felt it heavier than others, heavier than I have too. But it’s there. No two heartbreaks are the same. I can't comprehend Zauner's loss, but the way she writes about it helps me understand my own. And while grief can consume us, we have to take in the light when it shines.

That’s what I feel when I hear this record. The intermingling of these feelings isn’t unique to 2021, but it felt especially prescient this year. Take in the hope with the hell. The big anthemic choruses with heartbreaking lyrics. I'm usually wont to indulge my sorrows in the saddest of songs with the darkest of tones. But Jubilee showed me how therapeutic it can be to blast the sugary sweet surge of "Be Sweet" through the car speakers, tears streaming, off-key belting along to those long vocal runs.

It’s an overwhelming time to be alive. Japanese Breakfast gave us the soundtrack to feel it all. 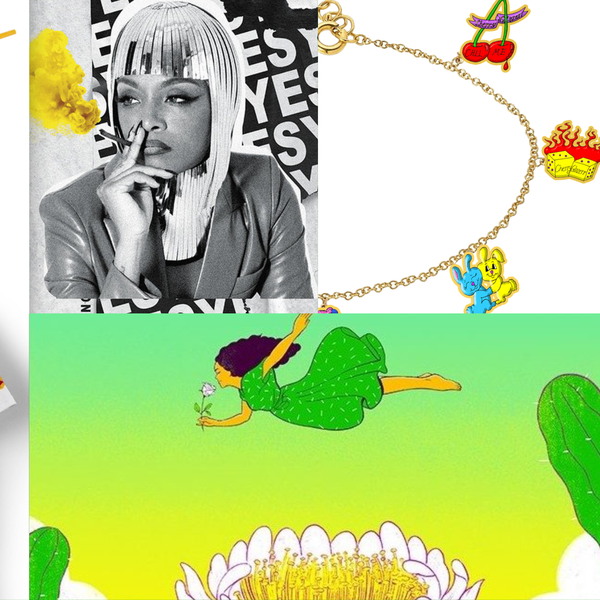 In this special edition of Add to Cart, KEXP spotlights merch from women artists or women-fronted bands in honor of International Women's Month, like Bomba Estéreo, Japanese Breakfast, Valerie June, and more. 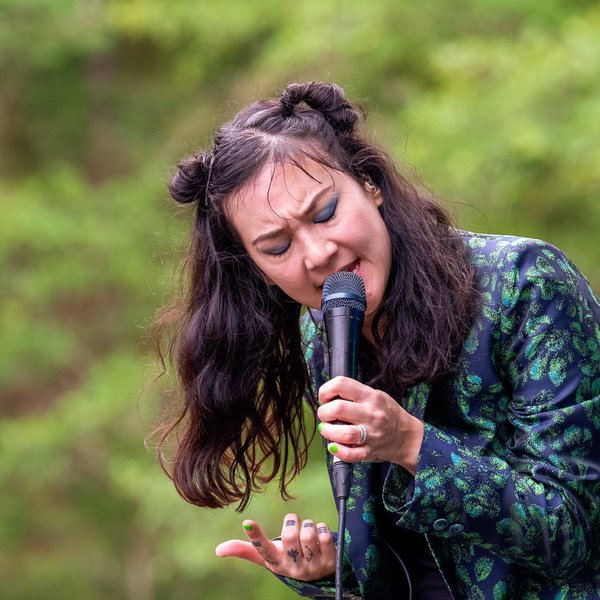 The Many Roles of Japanese Breakfast

Music, books, film... is there anything Michelle Zauner can't do? 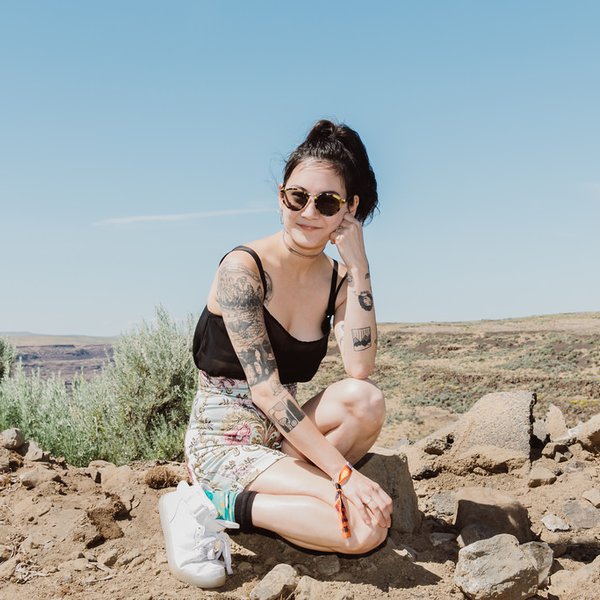 Before she’d go on stage for one of the most memorable sets of the 2018 Sasquatch! Music Festival, KEXP picked Zauner’s brain on touring, staying creative, her ventures into other visual mediums, and more.