From being under-the-radar torchbearers for a generation of booksmart punks to one of the most thoughtful and reliably great American bands working today, Protomartyr have made quite the stellar career out of creatively dissecting the depths of societal systems and human nature.

To say any band are “of these times” is a gross oversimplification of people who make music during any time period that have ever existed, and the Detroit quartet are most certainly not mere reflections of contemporary unrest and anxiety. If anything, they prove people are the same as we have been throughout the peaks and pits of history; some of the band’s themes are nakedly Biblical.

Traditional masculinity has always been a plague to a righteous and inclusive society. Parents have always lamented their idiot children well after the casket drops. The devil has always fashioned himself the hurt little boy other people never gave a chance. In the dim light of a dive bar at the center of a beer-soaked celebration of life or retreat from death, “another highlight” has always sounded like “another High Life.” It’s always Miller Time somewhere.

Protomartyr’s songs took an entirely new context after the long sunset of November 2016. It has led us to a dark, dark time, but that isn’t why the band’s importance is especially timely in the washed in and washed out streets of a global pandemic and near-worldwide resistance to a system that grinds down a very particular subset of our world’s population. For some of us, times have always been bleak. And we get through those dismal periods with beauty and a healthy serving of gallows humor. As a lyricist, Joe Casey investigates a range of moods in a very distinct way, and they resonate with earned pathos. The flower blossoming in the darkness.

In interviews, Casey (with characteristic Midwestern modesty) often downplays the importance of his words to the band’s identity, pointing out his lyrics wouldn’t exist without the formidable musical talents of guitarist Greg Ahee, bassist Scott Davidson, and drummer Alex Leonard. (For fellow word freaks, the latter is indeed the grandson of the revered novelist, inheriting a love of books to get him through grueling tours, hitting up used bookstores right alongside Casey.) Protomartyr’s instrumentation has only grown more nuanced since 2013’s punchy and sometimes gleefully pessimistic No Passion All Technique, glacially congealing into the widescreen journeys the band takes themselves on new album Ultimate Success Today (out now via Domino Recording Co.).

A formative influence and frequent comparison for the band has been in the caustic, (sonically and lyrically) abrasive abandon of the Fall, though in the five-act play of this first leg of their career, they’ve evolved into a style all their own, skyward post-punk favorably linked to that of early Interpol, only with the baggy suit wearing lead singer constantly painted as the “drunk uncle” of his younger bandmates. While it might be a stretch to say Ultimate Success Today is Protomartyr’s “jazz album,” the genre certainly informs the direction of the album, adding a musical element to its themes of chaos, failing health, and systemic decay.

Lead single “Processed By the Boys” feels especially topical before you remember violence perpetrated by law enforcement isn’t an especially new subject. (Casey recently joked the best way to foretell the future is to write about what’s happening today, as the album was written and recorded in 2019.) Nobody could have predicted the “foreign disease washed upon the beach,” but “a cosmic grief beyond all comprehension” is an evergreen observation of human life. Musically, the song starts out heavy with lots of empty space, driven by Leonard’s drumming feeling like semi-trucks being pushed off a cliff. The song eventually leads to saxophone filling the spaces with mournful accompaniment, a clear aural highlight of the composition.

“Day Without End” is augmented by sputtering alto sax, while the descent into body failure of “Tranquilizer” is underscored by the same instrument while Davidson’s bass is blurred by fuzz and Ahee summons a thunderstorm with droning, bleating guitars. Along with Izaak Mills on various woodwinds, celebrated Chicago saxophonist Jemeel Moondoc lends his formidable talents to the album’s expansive direction. The same goes for Nandi Plunkett (best known for her richly drawn synth-pop project Half Waif), adding an airy accompaniment to Casey’s plaintive croon on the songs on which she’s featured and breathing life into the anti-summer anthem “June 21.” On “Michigan Hammers,” Davidson’s bass stutters underneath Ahee’s soaring guitar as Casey rants about Motor City workers with their noses to the grindstone until they fall and never get back up.

The aforementioned shifting context of the world makes it easy to highlight the bleakness in Casey’s lyrics and the corruption of the systems which guide the feeling. Those themes are heavily blotted throughout Protomartyr’s five albums but are easier to spot here. The world feels like it could be ending even on its best days in 2020, so the air of finality on Ultimate Success Today is certain to be felt with blunt force. The “dawning of the day without end” Casey sings of on the album’s opener feels like the beginning of the final chapter of a novel, or the opening scene in the fifth act of the play Casey compares the band’s initial five-album run to.

“I Am You Now,” guided by Ahee’s grinding and buzzing guitar, Leonard’s eight-cyllinder drumming, and Davidson’s seamless bassline, Casey takes the role of the villain once again (as he does on The Agent Intelliect’s flawless opener “The Devil in His Youth”), putting a voice to the system holding our faces to the dirt. The grief he still carries from his father’s passing shows up in the ephemera, as grief is the souvenir we put in our knapsack as we continue the death march through life. The tranquilizers fade right as corporations engage in the space race. Holding onto our little dreams keeps us alive until we and every living thing around us dies.

The bad health and disrepair found on Ultimate Success Today is, as ever, tempered with a wisecrack here and there, as we eventually reach a pitch black fate anyway. “Self doubt is a stalking fiend / Narcissism is a killer / Along with no healthcare.” Though there are fewer corrosively hilarious one-liners here than on past Protomartyr full-lengths, the feeling of life being a cosmic joke with a bleak punchline crops up throughout. There seems to be no dream being sold to us these days, no immediate fortune emotional or financial, just the instinct to survive, even though we all know what waits for us at the end.

A sense of acceptance courses throughout the major key existentialism of “Worm in Heaven,” an ease in the wonder if it means anything that we were ever here. We’re here and then we’re not, we’re fleshy bodies and then we’re ash or compost. As humans, we’re always worrying about the worth of our lives instead of taking solace in the temporary nature of all of this. If the past is full of dead men and the future is a cruelty, why wouldn’t our default setting be resignation? Or fear? Or trying to feel better about the end?

As Ultimate Success Today floats into the ether toward the next era of Protomartyr, Casey sings, “Remember me as I lived / I was frightened, always frightened.” 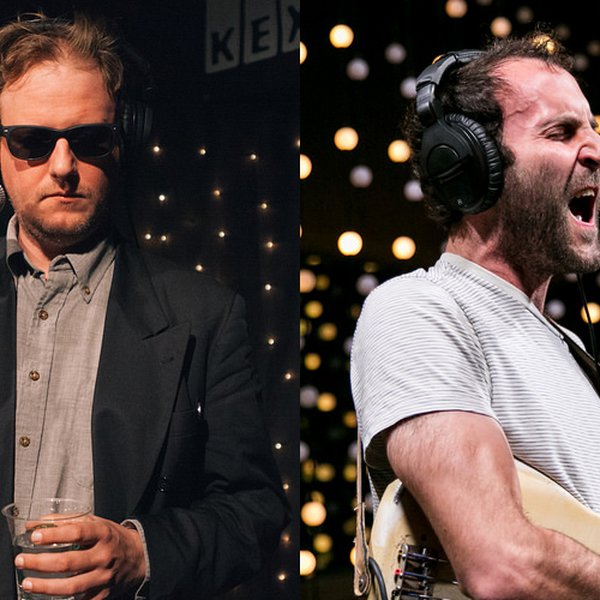 Protomartyr have shared their take on Preoccupations' "Forbidden"

Song of the Day: Protomartyr - Why Does It Shake