Love, Life, and Fatherhood: Deserta on What Influenced Their Debut LP Black Aura My Sun

The story of the band Deserta — cheesy as it sounds — is the story of the power of love and maybe also a story of how music — in this case, filtered through tons delicious reverb — can say things that sometimes words cannot.

Los Angeles-based singer/songwriter multi-instrumentalist Matt Doty first came to our attention during his days in the now-defunct Saxon Shore, but it was while writing music for his other band, Midnight Faces, that Deserta was born. Now a three piece, they were kind enough to talk to KEXP's Owen Murphy after a live session on the Midday Show with Cheryl Waters.

KEXP: What was the initial spark to do this?

Matt Doty: I had just gotten a new studio in L.A., and up until that point, all my studio experience was in my home somewhere. And I feel like taking it out of my house and having a room somewhere allowed me a little more freedom and a little more volume to get the sounds that I had always wanted to achieve, but I just feel like maybe because I'm such an introvert and I was worried about people hearing what I was doing, that having a private space really let me get to the the point in this record where all the songs kind of came together.

What was the first song that came together for you, that you knew you had something?

Matt: It was "Hide." That was the first song that I had done, and we were writing some songs for Midnight Faces at that time. And when I was writing, I was like, "I like this. It doesn't really sound like something that would go with that band. I'm going to try to add some vocals to it." And I heard some melodies and kind of went from there.

Would you take me through when you're working on a song, all different ways you listen to (it) and where ideas come from?

Matt: I mean, I sit down and I come up with a basic song structure and that's never how it ends up, but I'll just have some melodies and some drums. And then I make an MP3 and put it up on SoundCloud. And then when I'm out of the studio, a lot of it comes from being outside and just, like, going on a run or a walk in my neighborhood and listening to it. That's when my blood is pumping, and I'm just listening to it and that's when a lot of the ideas come. And I pause the song and when I get a melody, make a voice memo. And then when I go back to the studio, I hear the sound and I know what I want to do with it. I'll make a note of, it's like a synth part and like a drum part or whatever and just know that that melody will go in that direction.

One of the things i think is interesting about shoegaze is the guitars — I guess the keys, too — create overtones. Echo, reverb, delay, or whatever, creates almost different melodies that wouldn't normally be there if you didn't have those things on there. You do hear things within that. I hear emotions that wouldn't be there.

Matt: Yeah, it's a lot of stacking of the same sound and not necessarily using a different mic or a different reverb or anything, just layering it like all the guitars I play twice and each time I play it, I play it a little differently, not intentionally, but that's just the way it comes out. And then panning each guitar hard right and left, and then the same with vocals. The vocal parts are like four to six vocals, kind of doing the same thing, but with all the same effects.

So, you're a father. How did that inspire, influence? Anything? Nothing?

Matt: Being a father inspired this album in the sense that it was one of those things that I knew I always wanted for myself, and when I finally had my son and I was like, oh, I'm a pretty good dad. And I wondered [about] the other things that I had always thought about doing that I always wanted to do, like, 'huh, maybe I should try those things, too.' Like singing or putting out my own record and not having anyone else's input on it. I mean, my wife and I bought a house like just... all these kinds of things that I'd always just kind of put off... it all kind of triggered — this effect and I think the day —um... [pauses]

Are you getting emotional?

Matt: I'm an emotional guy.  I'm a nurse, so, you know, gotta — gotta have it so — that'll get you through it. So, the day I recorded "Hide" was also like the first day that my wife and I started talking to each other. We had seen each other at work, and I had asked one of my coworkers who worked with her, who's your friend, because I saw them talking one day and she gave her my number. That was the day that I was recording "Hide" is the day that we started texting, and I feel like that moment was just like, triggering like, I don't know. It brought something out.

What do you think it brought out?

Matt: Just trusting my gut a lot more and going with these feelings that I've... always wanted to do and knew I wanted in my life but didn't necessarily have... the confidence to make that jump.

The last song in the session was "Monica," right? Your wife's name isn't Monica, is it?

Matt: No, that has nothing to do with the song. I've never dated anyone named Monica. That's actually just the font on the Santa Monica Pier as you're on the 101. It's really nice. And I didn't want to call the song "Santa Monica," so I just cut it and like when you're driving down the 101 and you look and see Santa Monica, like a really nice looking font.

Straightforward, what's the song about? Or is there emotions, thoughts, or feelings that it evokes?

Matt: I would have to sit down and think about the lyrics and stuff... um.

You've lived with this for a long time. Did any themes reveal themelves to you that you didn't realize were there when you're laying it down?

Matt: The lyrics kind of come later. I find words that fit the melodies in a sense. I'm not really good at talking about the music in that way (laughs). It just comes out and that's what it is. And I cannot explain it — two separate sides of the brain. I can't, like, explain that side of it, I don't know.

Tell me what makes Paul a great drummer.

Matt: I don't know, what makes you a good drummer, Paul? You're just —

Paul: I think as far as drumming, I always wanted to make the song the best that it can be. And if that means learning the exact parts from the record or just giving the feel and emotion to translate the best way it can without overplaying, without taking over the show, that's at least what I like to hear in drums. So I think that's what I try to emulate when I play.

Is there a song on this record that's extra special to you? That grabs you by the heart?

Paul: One of my favorite songs on the record is "Hide." Matt and I had been talking about The X-Files, which I love. And there's a really amazing episode of The X-Files. About halfway through, I think... season four, and it's about reincarnation and it's about love-connection through every form of reincarnation. It's called "The Field Where I Died." We had talked a lot about that. And, so when Matt made a song about it, I felt really honored and really connected to that song.

I'm bouncing around a bit, but Matt, you talked about your wife and how she's changed your life. What makes her an exceptional person?

Matt: Oh man, get me going again (laughs). She's such a sweet, caring, empathetic person. She's always taking care of me and our son, and other people. She works at a children's hospital as a dietician and gives a lot to her work and just as much when she comes home. She's just an awesome person.

Is there anything else I didn't ask that I should have asked?

Paul: We're really into Tiki. I think one of the things that makes Eric special, too, is his vast knowledge of of film and more specifically, Tiki, which he's passed to me now. And it's quickly turned into an obsession.

Eric Hehr (bassist): Where do I even begin with Tiki? There is a period in the mid-century in America that's now, in retrospect, called the Polynesian pop movement. It was when all of the troops in World War Two came back from the Pacific Islands to America with all the recipes specifically for like punch bowls. So there's tiki bars now all over the place and they've existed since, forever and forever ago. The first one is from the '30s in Hollywood, which was Don the Beachcomber. But I love the history behind it. I love the aesthetic. I love the cocktails because I like to drink. And they're pretty boozy. Yeah. I'm trying to get these guys on the tiki train.

Paul: We're fully on the tiki train now. It's fantastic. We spend our our time together at the Tiki Tea in Silver Lake, and it's a beautiful thing.

Matt: I had no idea what Tiki was until our first two and we were driving to Phoenix. And that's like all they are talking about. Guys, what are you talking about?

Deserta's debut album Black Aura My Sun is out now on Felte Records. 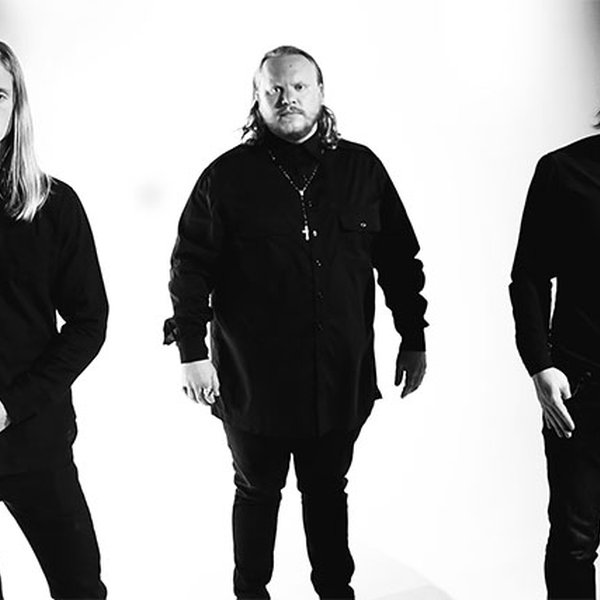 The career of Midnight Faces frontman Matthew Doty feels like scrolling through the KEXP Blog. He began making music as a teenager with childhood friend Jonny Pierce of The Drums (who was recently in town and who we interviewed). And as a young adult, he co-founded the band Saxon Shore with Josh ...