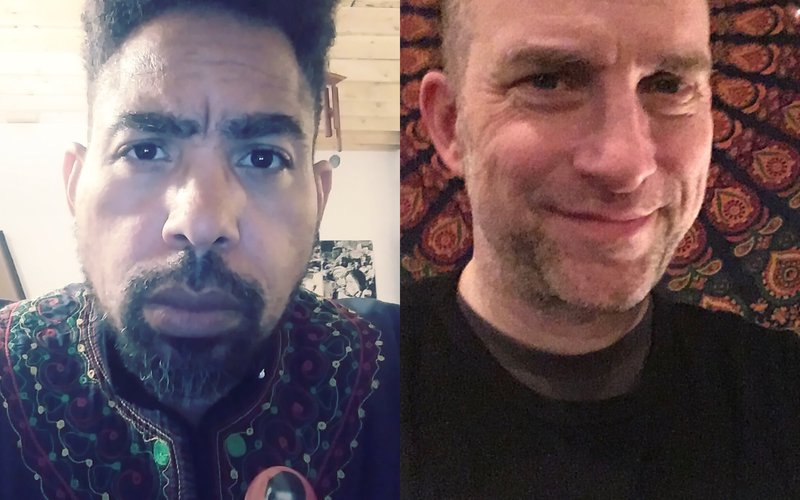 You may know J. Robbins and Damon Locks from previous bands, the recently reformed Jawbox and Trenchmouth, respectively. They've known each other since high school. Now both have just released really interesting new music. For Damon, it's a full-length called Where Future Unfolds under the moniker Damon Locks - Black Monument Ensemble via International Anthem. For J., it's a self-titled solo album on Dischord Records. This is a conversation between two old friends who surprisingly both find themselves looking for the same thing, community, amidst what Damon calls "the apocalypse." The conversation was recorded in Seattle at KEXP by Owen Murphy, with Damon talking to us from Chicago and J. from Baltimore.

J: Well, we know each other because we went to an art magnet program together when we were in high school and I was a weird kid who didn't really know where he fit in. And Damon and a small group of punk rockers in high school art class kind of threw me a lifeline and brought me into the DC music underground and basically kind of opened up my world. That's why I am where I am now.

Damon: Yeah, I apologize for that. [laughs]

J: I feel like Damon has always been a little bit of like a guiding light to me in terms of trying to look beyond the obvious, sort of deconstruct the things that are around you. I feel like that's been present in pretty much all of his art and music ever since I've known him. See what you can make. That allows people to see the world afresh.

Damon: I always am super proud of Jay because everything that he would decide that he wanted to do, he would then just learn how to do it. One of the things that I can always count on for like younger people playing guitar, when Jay shows up, I'm like, "well, y'all should check this out, because this is how it should be done."

When we were younger there was this community relationship that was happening to people in bands and people in the audience, right. And we were kind of following with whatever trends that were happening in that world, right.

J: Everybody kind of knew the secret handshake.

Damon: Here we are in 2019. What do you think your relationship is to the audience. How has it changed? Because I feel like there's not there's not necessarily a community.

J: I started really loving house shows. Some of my favorite shows in the last couple of years have been seeing John Vanderslice, we're seeing Mark Eitzel at this house in Roland Park here in Baltimore with like 40 people. And what's interesting about that is, not only because I'm huge fans of both of those guys and it's incredible for me to be in a room 10 feet away from Mark Eitzel and just filling the room with his voice. I mean, it's awesome. But on another level what's interesting about that is, like this particular place in Baltimore people come to these house shows just to be there, like a lot of the people who attend these shows are just the dude's neighbors and they're like, "Oh yeah it's this thing that Scott does on Tuesday nights, you know, he has music in his house" and they appreciate it too. I wonder if that is part of what plays into your performing your music in venues that are sort of not traditionally quote unquote music venues.

Damon: I am attempting or I'm most interested in not thinking in terms of scenes or the music scene at all. I just want to figure out ways of making music for people.

When I was younger I really felt like there was us against them. Like I'm like, OK, I've established the "us." I know who "us" are. And then there's the "them", right. But then the apocalypse happened and we're all just trying to survive. So I don't care whether you owned Happy Go Licky's EP or not. I just wanna know what you're doing to survive. And if I can support that, I'll support that. So I'm just trying to reach lots of people.

J: I think this is probably a common thread then for you and me both. It's playing out differently but it's the same exact impulse.

I have a song on my record that's called "Soldier On." I'm like, I couldn't say anything more obvious than that. It's me talking to myself saying, you have to put one foot in front of the other to get anywhere and no matter how bad things look, you're not going to get to a better place unless you keep going. And I want to share that with people and I want to do it for whoever is available to listen.

J: I wanted to ask you about how conscious it is between the Trenchmouth days up 'til Black Monument Ensemble. I feel like if you listen to Trenchmouth, like your interest in hooks is 100 percent there. But Trenchmouth never made anything easy for anybody. It's like the secret handshake is implicit like you've got to know it, or at least make an effort to learn it if you want to really appreciate what's happening. Whereas Black Monument Ensemble, everything about it — the fact that it's repeated melodic phrases and that it's much more melodious and that the music's obviously communal — it's like your whole sort of project of bringing people in as opposed to like challenging them at the door and going like "yeah, do you know the password?" It's pretty awesome.

Damon: I think that there is a lineage. The thing that's always been in me and I'm very happy that Black Monument seems to be able to express is that when I was a child, I loved The Specials. Jerry Dammers creates the imprint on Chrysalis called 2 Tone Records, and 2 Tone takes over Britian for a like X amount of time. And I would just look at pictures of people dressing like a band and being it will be like, "Oh my God, this is amazing." Look! Everyone loves this thing!

Fast forward 10 years, Public Enemy puts out "By the Time I Get to Arizona Lyrics" and they put a video where they're blowing up something, the mayor or the governor of Arizona, can't remember which one it was. They're on the news. So, Sister Soldier and Chuck D, they're all talking on the news and everyone's talking about this thing and I was like, How do you access that? Like the music I know is just talked about through this group of people. How do you affect the rest of the real world? And so a lot of what Black Monument is doing is the same impulse I had as a kid. How do you direct people that aren't buying the same records that you are or dressing the same as you are?

Damon: How has your music changed?

J: Having been a little bit of a disciple of yours, Damon, as you know especially when I was much younger, it's like, Damon was the guy who is kind of showing the way to what is punk and one of the essences of punk is like not taking things for granted and not being too obvious and finding a way that like challenges somebody. If you're going to say something, say it in a way that makes them do the math a little bit.

And I think that sometimes I kind of used to run with that idea into a place where I could make it a little bit of a hiding place rather than actually using it as a confrontational tool and I feel like my overarching interest is just to communicate directly with people instead of being like a dude with a guitar who also has to sing in the band, so lyrics are important because I'm trying to communicate with you.

Damon: I think that what we're talking about is what drew us to being in the punk scene. We were operating where you were communicating with a group of people. You were having experience with a group of people in a small club. And that changed over 20 years. Who those people were and what venues we were. It wasn't in the basement, wasn't in the VFW halls. It was in big venues, right? And I think that we're kind of still seeking out that connection with the audiences even though the scene and the structures have changed, you got shift around to still find that connection with people. 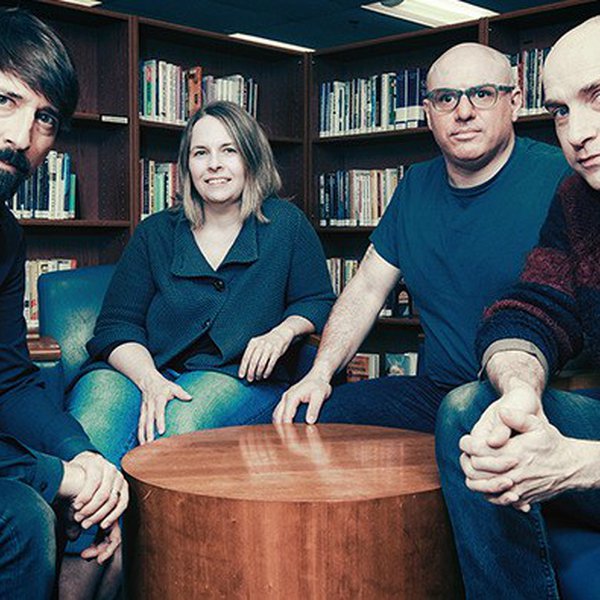 Jawbox Reuniting for First Tour in Over 20 Years

The D.C. post-hardcore quartet are playing 12 dates this summer.