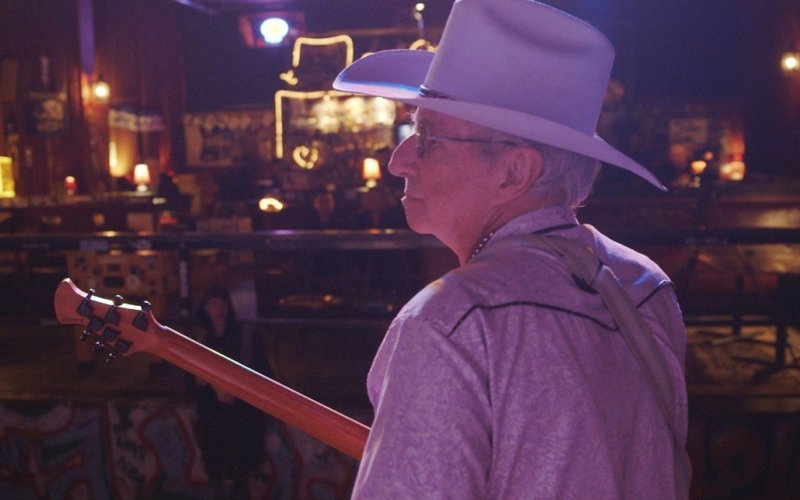 Seattle celebrates its 45th Pride Festival and parade tomorrow. During that first festival, though, in 1974, a group considered to be the nation’s first openly gay country band performed. They’re called Lavender Country. Jake Uitti has this profile of the band’s front man, Patrick Haggerty.

Born in 1944, Patrick Haggerty grew up on a dairy farm outside Port Angeles, Washington. He milked cows barefoot. He had 10 brothers and sisters and a Dad who accepted him for who he was.

"My father saw what he had on his hands when I was 5 years old,” says the 74-year-old Haggerty, fighting back tears. “He saw quite clearly that I was destined to be the biggest sissy in the country — and I was. The point is: my dad’s permission to be who I was, to wear bathing twine wigs and go to the catholic youth organization talent show in drag and run for head cheerleader and wear ballerina outfits all day at the 4H camp in 1958 — my dad gave me permission to do those things.”

In 1964, Haggerty joined the Peace Corps in India. But two years later, U.S. officials discharged him for homosexual behavior. He credits his own political radicalization to this experience.

In 1970, Haggerty went to Cuba to work a stint in sugar cane fields. He studied Che Guevara, Marx, Trotsky, and Lenin.

Haggerty moved back to Seattle in the early '70s and marched, protested, and lived with a diverse group of radical artists and activists.

Then in 1973, he released his now-infamous self-titled country record, Lavender Country.

Haggerty says since the lyrics in this album focused so much on a gay lifestyle, he was sure he would never have a career in country music. Nevertheless, it was a sacrifice he was willing to make.

“We were all taking those risks,” he says. “That was the requirement to get into the club was you had to risk everything to be out. That was the deal.”

But Haggerty still got some recognition for the album at the time. In 1974, he was invited to play Seattle’s first Pride Festival.

“I can remember that experience as clearly as the day is long,” he says. “We were ecstatic that 400 people came out for the lesbian-gay pride march of 1974.”

It wasn’t until 26 years later, however, that Haggerty began to receive real recognition. In 2000, the Journal Of Country Music published a well-circulated article that detailed country music’s lineage of gay songwriters and Haggerty was, of course, named prominently among them (the author of the piece was quickly fired after publication, Haggerty notes).

The article led to some well-earned notoriety, which included a performance at Seattle’s Pride Festival in 2000. But, Haggerty says, that show didn’t go nearly as well as in 1974. His band was pushed aside, he says, in favor of a more popular performer and had to reduce its set from an hour to only a few minutes. Even in 2000, despite the popular article and despite decades of love for activism and the arts, the pioneering queer cowboy hadn’t found his big break.

But in 2014, that all changed. A fan decided to put Haggerty’s salaciously-titled song on YouTube.

And people began listening in droves. So much so that North Carolina’s Paradise of Bachelors record label reissued Lavender Country. Haggerty then started touring nationally with his band for the very first time. He started getting interviews with outlets like the Rolling Stones. Lavender Country has also been turned into a ballet in San Francisco and there are rumors of a Hollywood biopic.

“It’s blowing sky-high!” he says. The front man is finally seeing success since those days of cheerleading tryouts and talent shows.

“Here’s really what happened,” Haggerty says. “50 years ago when we made Lavender Country the straight white men in the industry were not about to hear Lavender Country. They were way too bigoted. Way too homophobic and most of them way too racist to touch it with a 10-foot pole.” But, he adds, some things have evolved socially. “I didn’t change. Lavender Country didn’t change. Those men changed and this time they came down on the right side of the line.”

But, above all else, it’s Haggerty’s courageous concept of love that remains his life's through line.

“I’ve been with my husband for 31 years and you can bet on the fact that I love him,” Haggerty says. “I only hope that I die first because I don’t want to deal with what’s past him, okay? The second thing that I have to say is, and this is a Che Guevara quote, ‘The true revolutionary is motivated by deep feelings of love.’ And I think that’s beautiful.”

And that kind of revolutionary love is heard in Lavender Country's song, "Back In The Closet Again."