Rainn Wilson on Music, Education, and What Bands Dwight Would Listen To 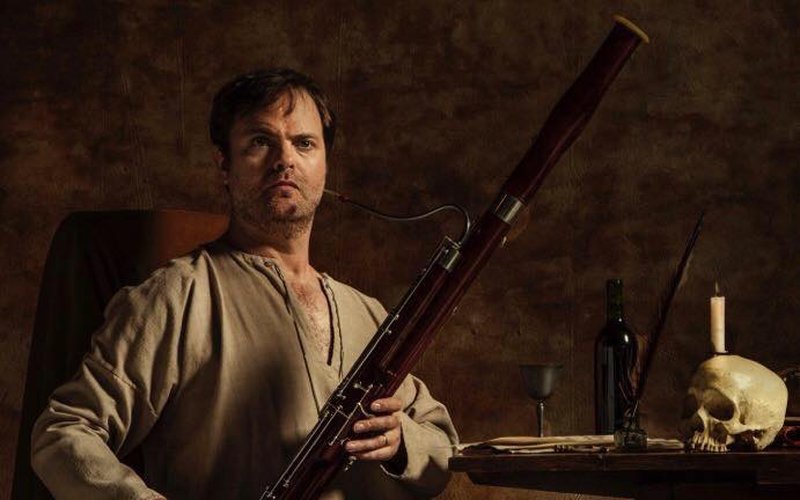 Rainn Wilson, best known for his role as Dwight Schrute on the acclaimed American TV show The Office, is a Northwest treasure. The writer, actor, and comedian, who grew up outside Seattle, is bright, eloquent and goofy. He is compelling and odd. And, this month, Wilson will host an eclectic night of entertainment May 30th at the Paramount Theatre to support Mona Foundation, an organization that works to fund education and educational programs in impoverished, underserved areas. Wilson, who has worked with the foundation for years, says that education is a fundamental reason for his own success and, as a result, he wants to pass that gift on to others. To preview the May 30th event, we caught up with Wilson to ask him about his love of music, when he first heard The Clash, and what he’s exploring these days, creatively. When did you first start paying attention to music?

Okay, let’s go back to the very beginning. The first time I was aware of music at all was when I saw Yellow Submarine. I was about 6-years-old and my parents took me to some hippie midnight show in the early '70s and I had never seen or heard anything like that in my life. I really felt like my brain exploded. I begged them — begged them — for an album of Yellow Submarine. So, they went to the record store, like, “We’d like the soundtrack to Yellow Submarine.” And the record store was like, “We don’t do soundtracks to Yellow Submarine. But here’s Sgt. Pepper’s.” So, I brought home Sgt. Pepper’s and I must have played that album 127 times. I knew every background track on it. That’s when I learned about music. It started with the Beatles.

Did you ever want to be in a band growing up?

I was in a band growing up! In high school, I was in a band called Collected Moss, which is perhaps the worst band name ever. And, yeah, we were terrible. We did a bunch of covers and really eclectic — the guitarist was, like, a Dead Head, so we did “Fire on the Mountain” but I really liked Elvis Costello and The English Beat and The Clash, so we played “Should I Stay Or Should I Go” and “Mystery Dance” by Elvis Costello. We were the worst. But it was fun.

Did you have a favorite Seattle group as a kid growing up in the area?

I grew up in the classic rock years and I left Seattle in ’86 before grunge and punk really exploded there. So, we listened to Heart. That was our Seattle connection. I grew up just north of Seattle. I went to Kellogg Junior High School and Shorecrest High School and there was a music store up there and apparently one of the horn players for Heart on their tour once worked at this music shop, so we were like, “Oh my god! The sax player for Heart used to work at that store! Ohhh!” That was our claim to fame, our connection to celebrity.

I didn’t know music could do what London Calling did...

KEXP is a huge proponent of The Clash. I read that The Clash was an important band to you. Can you talk about your love of the band and their album, London Calling?

Yeah, so I talked a little bit about Sgt. Pepper’s and there were some other albums along the way, great albums by Queen and Electric Light Orchestra in the early '80s and late '70s that were life changing for me. But really everything changed when I heard London Calling. A friend of mine in 1982 made me copy of it on cassette. You know, it wasn’t played on radio stations in Seattle. KISW and KZOK didn’t play The Clash or music like that. So, it just blew my mind. I didn’t know music could do what London Calling did. I didn’t know that it could be smart and passionate and really rock and make you want to bounce around and also think and feel deeply. It felt like this mysterious object that I had found. It was really beautiful and angry and defined my adolescence.

You drove a moving van in your early years while acting in New York. Was there a particular cassette or CD you played over and over while driving?

That was in the mid-'90s, so then I was listening to Pavement. I remember having a Wowee Zowee cassette that I really loved. And I also was into Uncle Tupelo, so I listened to a lot of them. And Guided By Voices. Those were my go-to bands in the early, mid-'90s.

Is there anything you’ve recently fallen in love with creatively that you hadn’t previously explored?

I started taking piano lessons about a year and a half ago, or so. And that’s been really interesting. I play a little music, I play some guitar and I play some drums. But when you play piano and all the keys are laid out the way they are, you can’t help but learn theory of music as you’re playing it, just how chords work and chord progressions work and what a root of a chord is. Piano instantly gives you access to the world of ideas that underlie music. Now, I’m terrible at it, I’m not very good at it, I don’t even know how far I’m going to go with it, but it’s really opened my mind in some really interesting ways.

I play guitar some and, as you know, you can use the same hand position all the way up the neck. But with piano, you have to learn which black keys, which white keys are in the scale. It’s so much harder!

It is harder. You have to really know what you’re doing intellectually around what you’re fingers are doing. With guitar, it’s like, oh here’s C and D and E and G and I can just strum these and I can put together 3/4 of all rock songs, I can just play and play.

Why is working with Mona Foundation important to you?

Mona Foundation goes to the core of what I think is the most important way to change the world and that is to focus on education. Time and time again, “charity work” where you are giving away stuff to poor people has been proven to not work. But what has really proven to change communities is focusing on education. So, Mona Foundation finds the most worthy educational initiatives around the world and helps fund them and helps them develop their long-term planning and infrastructure. So, it’s an exciting way to help. It’s raising money in the United States and then taking that money and giving it to education in some of the poorest parts of the world.

Was there a moment when you realized the value of education for yourself?

There are many moments throughout my life, which is why this is so important to me. I wouldn’t have the life I have or the career that I have if it wasn’t for education. For me, it started as an actor in high school and I went to my high school drama teacher and asked her if she thought I could ever be a professional actor. She was really enthusiastic and she was, like, “Oh, yes! You must try to be an actor. You’ve got lots of talent but you have to travel the world and read lots of books and fall in love and see new things and try new things and go to school and learn lots of different topics.” She was really supportive of me and I really feel like I wouldn’t be an actor if that teacher hadn’t supported me in that way at that right time in that right place in my development. So, I’m so grateful for what education has done and the doors it’s opened for me.

Dwight listened to a lot of death metal...

Dwight listened to a lot of death metal but I don’t even know what those bands are, like super out-there, dark, thrashing, head-banging music. But the important thing is when he was sad, he would listen to “Everybody Hurts” by R.E.M. in his Trans Am. That shows you the heart of Dwight.

Do you have a favorite moment or memory from your career?

Boy, a moment or memory from my career? These are tough questions, Oprah! You know, I don’t, I can’t really point to one. I will say that recently I got to do this Harry Mudd reboot character on the new Star Trek show and to get to fire a phaser and to get to sit in the Captain’s chair and to get beamed aboard a Starship, that was a dream come true for a nerdy kid like me. But I will say that really the thing that I most respond to is when people talk about how much The Office has meant to them. That they were depressed or going through a hard time or their family was getting a divorce or someone was sick or they were dealing with depression and anxiety and they watched The Office and it brought them joy and cheered them up and it made their life happier. That’s when I feel like, “Oh wow, this has all been worth it.”

If someone reading this is on the fence, can you give one final reason for them to buy tickets to the show at the Paramount?

If you can combine a great night of entertainment with a great cause, there’s really nothing better. And that’s what we’re trying to do. We have an eclectic, wild lineup of talent. It’s going to be funny and raucous and unpredictable and all the money goes to a great cause and we’re going to really try and inspire people to learn more about Mona Foundation and where their passion and commitment lies, and highlight its 20-year Seattle history.

Rainn Wilson & Friends will be held on Thursday, May 30th at the Paramount Theatre with special guests Joel McHale, Chris Ballew, Rachael (of Lake Street Dive) and Vilray, Michael Franti, Jack Lenz, Toronto Youth Choir, and some surprise guests, too. This special event will benefit the Mona Foundation, a locally based non-profit celebrating 20 years of partnering with and supporting grassroots initiatives around the world that provide education to all children, increase opportunities for girls and women, and emphasize service to the community.