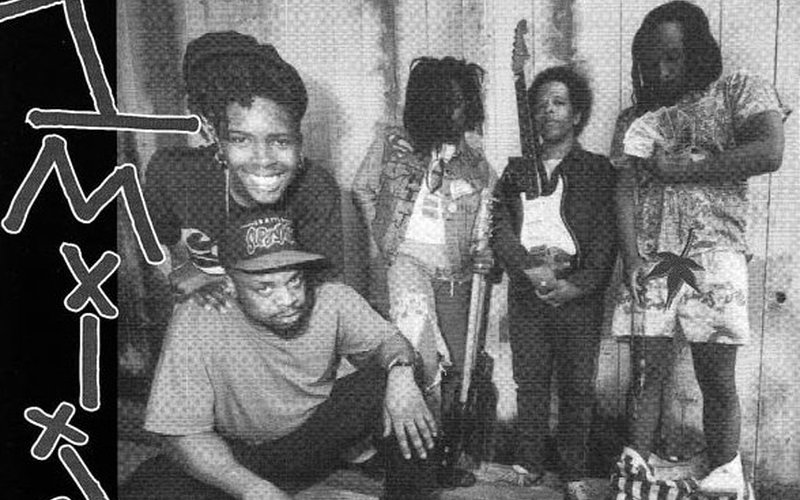 April marked the 25th anniversary of an album called, In Gods You Lust, by a Seattle band called IMIJ. It was an all-black rock-grunge-reggae fusion band from Seattle that almost made it in the '90s until a national record deal went sour. This is a band KEXP’s Audioasis host, Eva Walker, rediscovered lately. And she got to interview the band recently.

"One of the things that first stood out was, wow an all black rock band based out of Seattle. Amazing! So, I was already excited about that," Walker says, explaining the first time she ever heard them. "I put the record on and every song blew me away. I couldn’t believe I hadn’t heard of them before. And another thing that’s interesting about them is that they came up with the name IMIJ from Jimi Hendrix. It’s “Jimi” backwards. And being the huge Jimi Hendrix fan that I was, that was another thing that stood out. Like, woah! And it only being three years ago that I hadn’t heard of this band, it was kind of amazing because something like this is pretty significant for someone who is in an all-black rock ‘n’ roll band in Seattle. So, I know there are more of us out there and in the Northwest, in general. And this is a band I wanted to introduce to the rest of the Northwest and the rest of the world."

Listen to the interview below, and read more from our chat with bassist Cedric Ross, guitarist Cris Omowale, and drummer Davee C.

Cedric Ross: We were signed to a subsidiary of Capitol Records. So, technically we weren’t Capitol Records but they were a part of what we were doing. I think it was Liberty Records that we signed to. And in that experience, the deal was, hey we want you guys to cut an EP and then that’s what we’re going to use for now and then we’ll really introduce you with an album, I don’t know, maybe eight months or a year down the road. And then while we were trying to cut this album, the record label executives were not feeling good about our song selection and there was rumbling about not being comfortable about marketing an all-black band. Basically, we got dropped the second we gave them the record and it was an extremely emotional experience.

KEXP: At that time, why do you think the label didn’t play you guys?

Cedric: This would qualify as one of those things that we probably all have opinions about and I completely respect the opinions of my colleagues, so I’ll just say really briefly from my side, I think that the era at the time the way that the public saw black rock bands, if you will, they saw it in terms of quantity not in terms of quality. Like, we already have the black bands that we need. We don’t need any more black rock bands right now, for one. And two, if they see our pictures on an album cover, will they actually purchase the record? Both of things are foreign to me and so it was hard for me to grapple with because I felt like we were doing some really, really good stuff.

For the In Gods You Lust record, were there any themes on that album that you feel told a story that you’d want to share?

Cris Omowale: When you look at the record, it’s basically code switching from the beginning to the end. “Crackdominium” especially. I’m a nurse now and as a psyche nurse working with people in rehab, if you look at it, “Crackdominium” starts with you’re trying to cop, you meet your dealer, then you’re high, then you need it again. So, you go from thrash to funk to reggae back to thrash. And that’s the intention. When you look at “Medgar Evers DGC Bill Clinton And Me/I,” it’s a juxtaposition of — we did that song at a real pop tempo and it was great. And everybody’s like, “Let’s go to the bank! This is going to be great!” And it’s about racism, so we said let’s drop it to half-time. And once we did that for us, it meant everything. Once we were able to perform it to the audience, it meant everything. Once the record label heard it, it meant nothing. And that’s a bad mix to come across. The only other thing I’ll say is that, like, the EP is the straight line of a joke and you never get the punch line because we did not get to finish our album.

25 years later, what feelings, emotions come up when thinking about and talking about In Gods You Lust?

Cedric: I think that, to Cris’s point, you know, we were looking to the punch line for the follow up to that EP. And so it definitely is a milestone to what we thought would be this incredible career. And had it not been for, and people may argue that the reason why we didn’t continue on with the label might have been because of label issues or this or that, but I believe that the atmosphere — the racial atmosphere — played a bigger part than it should have and I am grateful that I remember it but that I’ve also moved forward in as positive a way as possible. I continue to play music and I continue to try to communicate to my son so that he understands he can be whoever he wants to be and that he’s not limited by any racial boundaries.

Davee C: Yeah, it was a long time ago. There are a lot of things I don’t remember. But what I do remember is that we came together and did something really special. Not special that in that I need to tell everyone it’s special. But it was special to us — at least, it was special to me. It was on that kind of like "us against the world." Because it just seemed that no one liked what — no one could get it. Not nobody, but it was hard to move forward. But we still did it and we did it our way. And that’s really hard to do, especially for a black band. Especially a black rock band, you know? But we did it anyway. And I can always just look back and go — and just be happy about that, that we did it our way.

Cris: You brought up a lot of stuff, you know! Like, I wasn’t really thinking about this! It comes around sometimes. I definitely appreciate, like I said with the code switching, it seems like this record, if we call it something else besides In Gods You Lust. Maybe call it Tuesday or A Day In A Black Kid’s Life because you’re dealing with racism, sexism, unrequited love, and crack. Like, the thing that always comes back to me is Crackdominium was across the street from our house. It was an apartment building and they bought crack in one section, they cooked it another section, and the dude who got the money was in the other section. So, that happened all the time. But the thing that struck Davee C and I one day was a kid had left that night and came back that next day. And they were like, “Dude, it’s 10 AM. We’re not open for you.” We watched him go through this for like four hours and we had the song by the time it was over. Like, this is awful, you know? In some ways it’s antiquated but in some ways, it’s just like — DeVon Manier was talking about having a network for black bands. We were by ourselves in Seattle, Washington. Davee C is by himself in Hilltop. Shannon’s by herself in Spokane. But for some reason we all met. If we hadn’t, you wonder: do you exist? I see The Black Tones now and I’m like, wow! I’m not by myself. And you see us, you’re like, I’m not by myself. And that’s important. Because, as we explained to Capitol, too, when they were like, “Why do you play so many styles of music?” We say, “Because we can.” Because we are your cooks, we are your dishwashers, we are your maids. We’re the people that have to listen to music that you play while we exist purely. So, yeah, guess what? My family grew up in Texas and I can play country music. And I can play it good enough that you will go, “Oh!”

What do you think IMIJ would have contributed on a national level if given the chance?