I Comb the World for Bad Advice: The Intelligence's Fake Surfers at 10

With Rewind, KEXP digs out beloved albums, giving them another look on the anniversary of its release. In this installment, Martin Douglas (followed by Lars Finberg) explores the Intelligence's outstanding fourth full-length Fake Surfers, which celebrated 10 years of being in the world on Sunday, May 26th.

I. I Don't Mind Sifting Through Trash, Everything is Just Trash

For the multitude of good things about the city, Seattle still kinda sucks on fairly regular occasion. The people are as passive-aggressive and standoffish as ever; there are cliques everywhere and they're markedly exclusive (even though a lot of it is just introversion of some Norwegian heritage); it is outrageously and prohibitively expensive for the creative class. Frequent readers of this site are well aware with my kvetching about Big Tech sapping the character out of the city and sealing us all in IKEA showroom tombs. People are getting priced out and moving to Tacoma and Portland and Los Angeles (even Lars Finberg moved back to California). Pretty much nobody who still lives here remembers sunset beers on the back patio of the old Funhouse. Healthy Times Fun Club has been gone for years.

I went to see Shannon Shaw at a bookstore in Tacoma a month ago. I haven't done anything that cool in Seattle in years.

Seattle is not the town it was in 2009. No town is. I see the Seattle of a decade ago in Fake Surfers, this collection of cynical, pessimistic, hysterical, writerly, cracked surf-punk. And psychedelic basura-pop. And a subterranean bounce perfect for rap songs. And that thing few bands with pretty sizable followings really do anymore — where they use an old boogie like they're some sort of Lynch-created rock and roll band from down the street, playing their neighborhood bowling alley in the sixties. I see the band stickers on the wall of the bathroom of dive bars across the city, right in the line of sight over a trough urinal almost the size of a bathtub. I see the discarded beer cans and god-knows-what-else in the trash cans outside. I don't see the bands whose members are working two jobs and still struggling to afford a practice space.

In Fake Surfers, I see the negative wit of an entire city soaked with rainfall in the colder months. I see the character in the grooves of the city I can only get to through memory as we approach a new decade.

Coming in on the crest of a wave, browning and filled with garbage, containing some of the best garage-rock bands of a generation, Fake Surfers was made better by the musings of its word-drunk, sardonic frontman. Songs with titles like "Thank You God for Fixing the Tape Machine" and "The Unessential Cosmic Perspective." Other people's songs like their relatively straightforward take on the poetic and disheveled Wounded Lion jam "Pony People." Look at its cover, even; a punk eyesore in the best way. Huge letters and inside joke plastered atop the now-repurposed cover art of jazz comp The Modern Idiom.

Finberg's lyrics don't sit at the foot of a mountain, on a vision quest for the answers to life's deepest, trickiest quandries. They flip off the sky in teenage rebellion. They flip off the rain pouring down on the moody tower. They flip off a certain very talented Portland band who released arguably the best album of their careers in 2009 and beforehand may or may not have sneak-dissed the Intelligence. (The burgeoning garage-punk beef is dismissed with a cheery "just kidding" at the end of the aforementioned diss track.)

Zombies walking through the walls for cigarettes. Only the lonely are left alone. Wounds opening and columns braiding themselves. No fishing in the Ice Age. Fake Surfers' lyrics sheet reads like an anxiety-stricken poet scribbling vivid observations onto the back of a handbill between sets at their local dingy punk rock club; in equal turns amused, bemused, trapped, set free, terminally bored (pun intended). It's very much a weird record, full of quirky, clever, unexpected flourishes and turns of phrase in ways which feel like it came from a distinct personality. Because it did. FInberg has the all-too-rare gift of being able to articulate the full range of personality through song. Sometimes the songs are buried in noise because sometimes life is buried in noise.

Fake Surfers is all the holy spirit of torn denim and shoes that smell like piss. It's the sensory overload of hearing depression and tasting blood from spitting out knives and seeing the frayed wires of your brain barely touch. It's wary of the flash in the pan but still present enough to remember its hand stamp at the door.

II. Blink Twice if You Understand: A Track-By-Track Breakdown with Lars Finberg

Lars Finberg is the creative nucleus of the Intelligence. He already did one of these for Terminal Boredom, but he had more to say and I guess I couldn't help myself.

This was pretty inspired by the Hospitals Hairdryer Peace, which is almost a smooth noise album.  It was an inspiration and reminder there’s no reason to aim for the middle of the road. I didn’t want to try to recreate the sounds from my home recording, so we just drug the cassette 8-track it was recorded on and plugged it straight into the console at the studio (The Distillery in Costa Mesa). When I asked what was making that audible buzz, engineer Mike McHugh just shrugged, so now it’s there forever. Title inspiration by the oldies cover band South Bay Surfers.

This is about the different temperatures of partnership. “The other side’s heated like the sea” is referencing how cold the expanse of a king size memory foam mattress gets when a couple goes to bed mad and sleeps on the furthest edge from each other. I was trying to sound like Pink Floyd with the organ there and make a chorus with the ugliest, all-the-drums-at-once beat.

When the credit card bills get so bad you don’t even open them anymore.  Then you get so paranoid of the debt police you can’t leave your room and pee in jars under the bed. The drummer who had been doing the cool snare roll quit and I can’t do a drum roll so we plugged the engineer's daughter's Casio into the mixing desk.  Was called “My Sharota” on the set list for years.

We ran the drum mics through a giant P.A. that was so loud it almost shot me through the control room glass like Back to the Future. I played the guitar so poorly, we were crying laughing and thought people would really freak out. We decided to leave it all in, but honestly you can’t even tell. I got to do the fake fade out and had it just perfect and when it gets really quiet, I accidentally pushed the master fader down a fraction and it goes ‘cruchnch’ that made me laugh so we left it.

This is also run off the home cassette recording, I liked all the tones and natural distortion.  It’s about working in the mail room at the Art Institute mailing out fishing lure packets to potential students/victims after wasting money myself there years earlier.

I thought the whistling part would go down in history, but the Peter Bjorn and John song ["Young Folks"] came out 10 minutes later. To add insult to injury, we played SXSW on that tour and the smaller room at Emo’s was suddenly empty. "What happened," I asked. "Oh, P B and J are playing the adjoining room and it’s at capacity so we can’t let anyone in here. Anyway, you’re on now."

The Portland band Eat Skull wrote a song called "No Intelligence” with a drawing of the Space Needle crashing down, so I thought it would be fun to return the compliment. It’s a joke though, I always liked their music.

I had bad sciatica for a long time and made me think about how it’s easy or tough to go around saying "God is fake" or bullshit or a joke until your health goes wonky and you go, "Uh hey, ahem, dude, just kidding! Help!"

I was afraid this was [going to be] some extreme pop sell out that sounded too much like Beck, but listening now that is a very ambitious worry. The bass starts too early, the drums change in the chorus too soon, the Casio is out of tune, it’s the first time I got to use an Arp keyboard that changes notes too slow for this song and it’s probably the best song on the record. It’s about how I’d clean the whole house and my girlfriend would come home and go, "Looks great!" (And then dump her shoes, jacket, purse, socks, bags, cups onto the floor.)

The first time I saw the band Wounded Lion, this song was stuck in my head for days. They pack a lot into two chords.

Loosely based on stories of raunchy foam party boats in Provincetown, of which I imagine there would be a psychedelic hangover. Funny how you can spend a long time doubling the nice main drum kit with a super compressed miniature child drum kit just right on expensive tape and it ends up just sounding like one kinda crummy drum set.

Jesse from the Duchess and the Duke went back to school and mentioned the book The Essential Cosmic Perspective from one of his courses and that title just knocked me out, so I wrote it down. I picture it a kind of high-speed claymation look at the evolution of the Target parking lot. The author emailed me a few years later saying it was almost as cool as seeing the book on The Big Bang Theory, but sadly I hadn’t read the book (only stole its title), so it was hard to explain the song. Anyway, I warned everyone consumerism was bad in 2009 and wow now look.

And I like "un-essential" vs." inessential," making it even stupider. I just realized it must be where our new LP title comes from [Un-Psychedelic in Peavey City] ... ON SALE NOW! 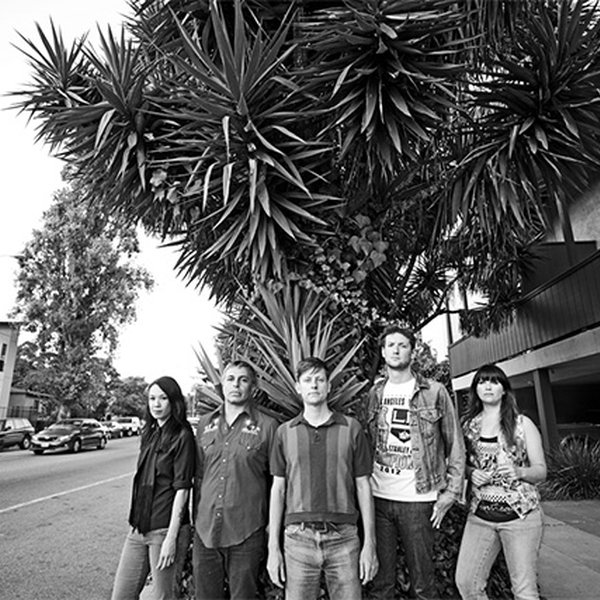 Song of the Day: The Intelligence - Hippy Provider

Every Monday through Friday, we deliver a different song as part of our Song of the Day podcast subscription. This podcast features exclusive KEXP in-studio performances, unreleased songs, and recordings from independent artists that our DJs think you should hear. This week, we’re featuring songs...