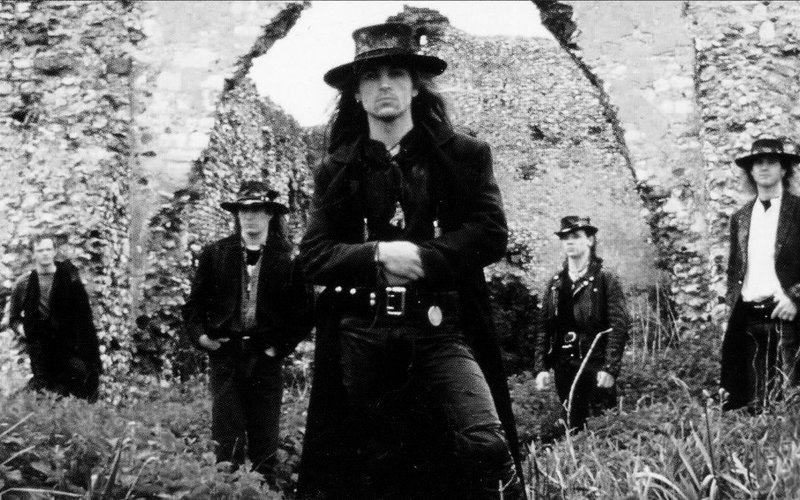 On Wednesday, May 22nd, KEXP is celebrating World Goth Day, declared "a day where the goth scene gets to celebrate its own being, and an opportunity to make its presence known to the rest of the world. We’ll be playing all the darkness all day long on-air from 6 a.m. to 6 p.m. PT, as well as revisiting some of our goth favorites – like Fields of Nephilim below.

Goth rock comes in many shades of obsidian. Art-schoolers Bauhaus preyed on Ziggy’s ghost for dub-inflected ditties like “She’s in Parties.” The Mission UK nursed delusions of Zeppelin’s grandeur, even roping in John Paul Jones as a producer. Even a mainstay like Siouxsie and the Banshees transitioned from post-punk into a distinctly British form of quasi-psychedelia.

Then there was Fields Of The Nephilim. 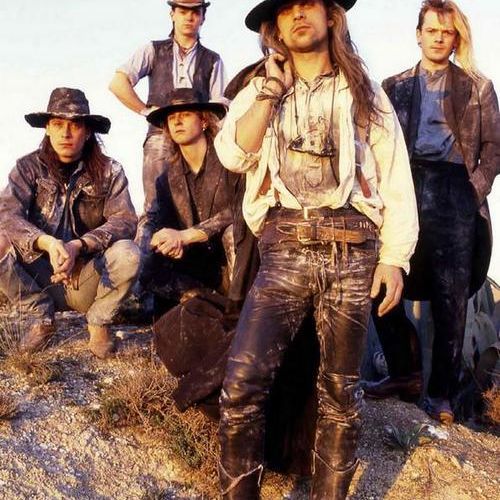 Decked out in dust-covered cowboy duds and layers of leather, they ignored the popular Stoker-Shelley approach, opting for a spaghetti western ethos informed more by Sergio Leone than Bela Lugosi. Predating steampunk’s 1990s resurgence and comics like Preacher, Fields of the Nephilim cut an intimidating image. Led by a classic front-person in Carl McCoy, the group embodied the band-as-gang principle.

Though identical to the non-initiated, each gunslinger contributed a subtle variant of the somber buckaroo persona. One can almost imagine fans talking while poring over images in Melody Maker. 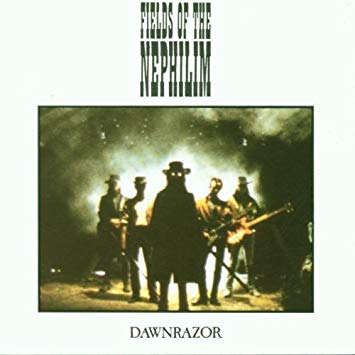 The group hailed from Hertfordshire, a county distinguished by its medieval ruins and for being a Star Wars production site. Following a few singles and an EP on Situation Two (Tones on Tail, Gene Loves Jezebel), Fields of the Nephilim graduated to parent-label Beggars Banquet for its 1987 full-length, Dawnrazor.

The opening track of Dawnrazor made plain the group’s intentions. The song is a reimagining of Ennio Morricone's “Man with a Harmonica,” draped in layers of metallic melodrama. From there, they kick into “Slow Kill.” Its lyrics paint a ghoulish gunslinger tale:

Up here on the bridge of night

To fall it would be so nice

Chase this misery out of this town

Bury my face into the ground

Yes, there was plenty to tie the band to the goth scene: Carl McCoy’s strangled howls, the chorused basslines, layered guitar mosaics from the Billy Duffy-school. Retro-futurists from the start, the band deployed samples, found sounds, and studio-generated atmospherics, much of which has aged remarkably well. Absent from Dawnrazor are ‘80s hokum like gargantuan snares and slick synths. In its own arcane way, Fields of the Nephilim was a true rock combo. 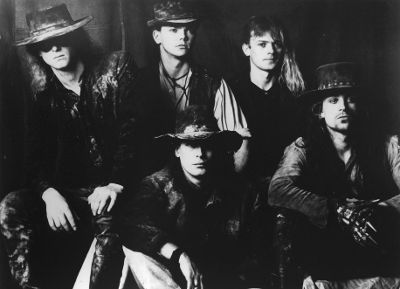 Dawnrazor and its follow-ups, 1988’s The Nephilim (Beggars Banquet) and Elizium (Beggars Banquet, 1990) brim with grim storytelling as well as a few genre deviations. Both “Vet for the Insane” and “Psychonaut” contain touches of space rock, while “Power” sports a cowpunk beat and twangy riffs that brush up against the odd major tonality. Despite these breaks with convention, a crossover hit along the lines of Sisters of Mercy’s “This Corrosion” or “She Sells Sanctuary” by The Cult eluded the band. 1988’s “Moonchild” came closest to the mainstream, reaching #28 on the UK singles chart.

Far from a singles act, each Fields of the Nephilim release was an exercise in world-building. The music possessed an undercurrent of mysticism imbuing everything from lyrics to cover art. Even the band’s name was steeped in biblical symbolism. Genesis describes the Nephilim as the progeny of "sons of God" and "daughters of men." In Ezekiel, an alternate translation of the word appears as "fallen.”

Contrarily, Fields of the Nephilim's catalog is strewn with material inspired by occult practitioners—Aleister Crowley, Austin Osman Spare among them. That dichotomy might owe to McCoy’s rejection of his Jehovah's Witness upbringing which led to an admiration of chaos magick.

In 1991, the original lineup splintered into factions: Rubicon and the Nefilim. This bled into decades of legacy-dulling: stop-start reunions, unsanctioned collections, general brand confusion. The Crowley-fixation and spells must have paid off: McCoy continues to front a version of the group—his voice and appearance seemingly untouched by time.

Maybe, given its murky mystique, the shadows suited Fields of the Nephilim. In those darkened corners, the band continues to influence practitioners of gothic and metal ritual. Or as McCoy sings on “Love Under Will,” in that burly baritone of his:

Between the cracks and hollows

Dig through the sand and soot to unearth Fields of the Nephilim's enduring musical legacy. Millennial Moonchildren, take note. 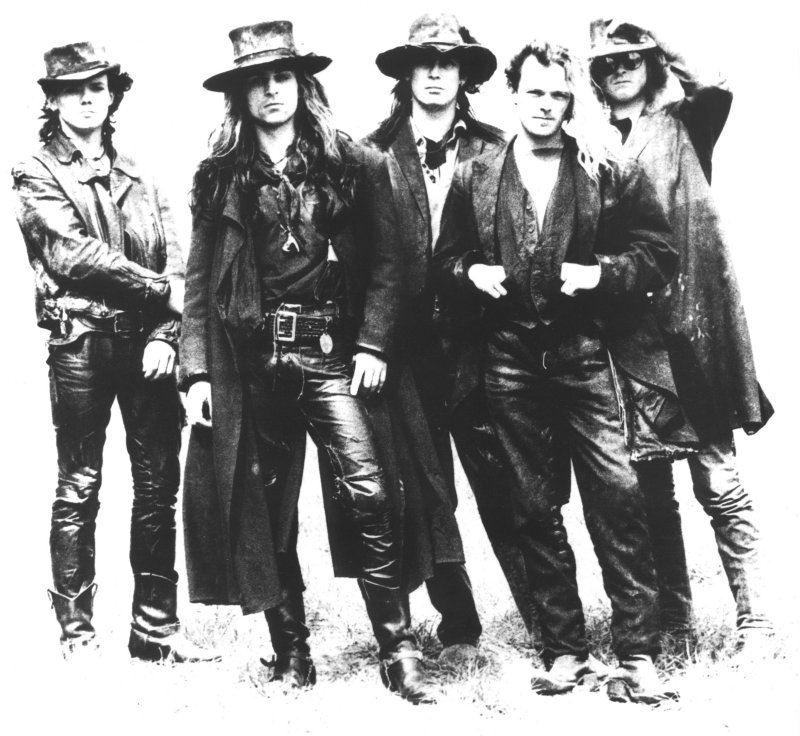 Ari Rosenschein is the author of Coasting, out now via Pen Name Publishing. He is also a member of the bands The Royal Oui and STAHV and is a former KEXP employee. 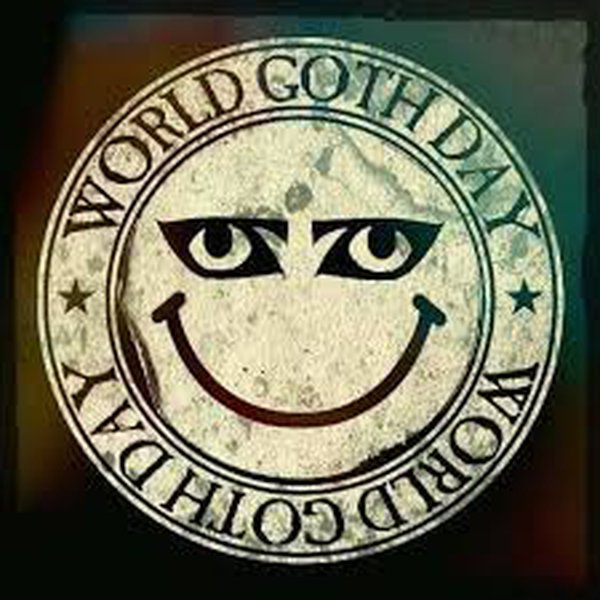 Layer on the black eyeliner and cue up Siouxsie Sioux — it's World Goth Day!