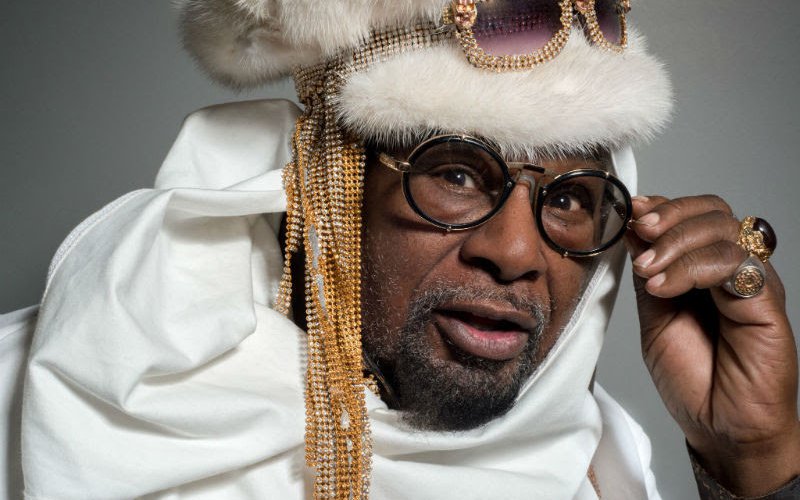 George Clinton has mastered the musical ecosystem. He knows how to adapt. He knows how to push the right buttons to send the right message. And he’s a legend as a result. For the man who helped invent funk music, leading a band is as much about delegating as it is standing in front of the mic and moving a crowd. As a result, he’s helped many careers blossom and blossom again. Clinton, who will perform in Seattle Tuesday and Wednesday at the Neptune Theater, took the time to talk with KEXP about his history as a musician and what he remembers most about being inducted into the Rock and Roll Hall of Fame, being a barber in New Jersey, and how he’s ended up portrayed in so many famous cartoons.

KEXP: What did the idea of funk music mean to you as you were helping to create it in the 1970s?

George Clinton: When I started saying “funk” in ’69-70, rock ‘n’ roll had been what I grew up on and I’d watched it change over the years. And we couldn’t get on rock stations in, like, ’69. They had separated the music stations into R&B stations and pop stations. Rock ‘n’ roll had been part of our whole thing when I was a kid. But we couldn’t be a part of it in ’69 and ’70. So, I said what we’re going to do is funk. Because blues and rock ‘n’ roll and all that was part of the pop-rock stations. So I said I’m going to do funk - this slow, nasty version of the same music. But I’m going to stay with the name funk no matter what, through the ups and the downs, just make it my thing. It wasn’t a group or a singer, it was a thing, a movement. So, we started over-doing funk. Funk everything. And by the time we got into the '70s, we started doing it with horns, with Bootsy. And we just called it p-funk. I would just make sure I would never stop being funky after that once we started. Even when we did a song like “Atomic Dog,” it was extremely funky. My whole thing is, I won't lighten up on the funk. I’m just getting started.

"My whole thing is, I won't lighten up on the funk. I’m just getting started."

Do you remember what emotions you were experiencing when you wrote and recorded the record Maggot Brain in 1971?

Oh, my. I was just on a roll. I knew how to get the emotions out of [Parliament-Funkadelic guitarist] Eddie Hazel, who actually played it. I knew how to get in that — because he’s a real blues kid. He was just a kid at the time and he was excited by Jimi Hendrix. I’d got him Jimi’s records and he had a natural blues thing. So, I just told him to think of your mama passing away. Grace, that was his mother’s name. But I knew — and he was like, “Man, fuck you!” —  but I knew it would be on his mind once I said it. And I just knew how to get the band in whatever mood I wanted them in.

What elements make up a good live show?

Oh, good songs, good grooves, showmanship. Whatever is provocative for whatever time period you’re in. What works now doesn’t necessarily work — well, it would work when I first started because everything goes around in circles. But styles keep changing. One time we were really funky in the diapers, in the sheets, things like that, taking off our clothes. Then there were suits. With the Mothership, it was extravagant leathers and furs. We went from one extreme to the other and being Parliament and Funkadelic and Bootsy, we had a way of doing a whole bunch of things at once that looked like they should clash with each other, but they didn’t. It’s really whatever the ‘hood is going through. Somebody in the band is going to learn — no matter how young it is, somebody in the band is going to pick up what’s happening today. And I’ll let them lead us. Whatever is happening in the time period, somebody in the band will know it and it will still be funky.

You’re often portrayed in cartoons, from Adult Swim shows to the NBA Jam video game. What do you enjoy about this?

I always liked character. I realized back in the day, I go all the way back to ’57 when Davy Crockett was the thing. Then the hula-hoops, I remember when that phenomenon happened. So, characters are like that. They don’t get old. You just put out a new record and you be the character and that works all the time. All of the cartoons and things really works good for us because we’re cartoons anyway. The age limit of the people on stage, all the different variations of styles. But the music combines. It’s like being in church. So you’ll be relating to the groove but you can be doing whatever you want to do, however old or young you are. That makes the environment work.

Do you have a favorite memory working in Motown?

Oh, wow! Basically just — you know, I worked in the New York building and our job was to get songs to whoever was hot in those days. I remember Tony Bennett. We were promoting songs to Aretha. Anyone who comes out of the publishing wing of the company, it was our job to meet up with all kinds of people. I didn’t necessarily have to write the songs for the record company but I showed them other people’s songs. If I ever had a song that I thought would fit a Tom Jones, I’d show it to him. Just working out of the building in New York and doing it for Motown who was so hot in the moment, it just turned me on. Even though we didn’t become artists on Motown itself, that gave me the knowledge of how that ran. So, I ran the group like a mini Motown, all the different styles and people we have in the band. If a bride would have got a hit, I would have been a bridesmaid.

Do you have a favorite memory working as a hairstylist in New Jersey?

Oh yeah, that was the fun shit back in those days, getting prepared because we knew were ready for Motown or whoever was hot at the moment. We went over to New York when Phil Spector was hot and watched them record. We were ready. And the barbershop was the place where we got ready at. We’d talk the record business, practice, and do hair all at the same time. That was where you hype yourself at.

Do you remember what you did the night you were inducted into the Rock and Roll Hall of Fame?

I went to sleep that night after that! But, before that, we were meeting old friends. We hadn’t seen the Rascals since the '60s. Everybody was going over their careers and reminiscing about that. The Jacksons, we were wearing them out because we were there when they first came to Detroit. Mavis, who we went back to with the real old days, the doo-wop days, all of us were just reminiscing on all those years. We hadn’t seen each other in so long.

You said you’re going to retire from touring May 2019. Is that still the case?

Are you just getting tired of it?

I’ve been running the past few years with all the kids and grandkids. I’ve also been doing a lot of theater stuff. They’re going to be doing movies on the group and plays on the group and new songs and stuff. So, I have a lot to do. And the kids can handle the shows.

Do you still think about space and the universe a lot?

Oh, man. Lately, a whole lot. I just got a feeling that something is getting ready to happen big time there. I can see the Mars landing thing. Something is going on they ain’t telling us about. The groove ain’t right. Someone is funking with the groove.

Is there one lesson you’ve learned that stays with you after such a great, eclectic career?

Do the best you can and then say, “Funk it!” If I had known that earlier — you won’t stress so much over a lot of things. Once you know you’ve done the best you can, you have to leave yourself alone. That can be worse than whatever you think is your problem. That would be my main lesson I’ve learned over the years.

George Clinton & Parliament Funkadelic perform on Tuesday and Wednesday night at the Neptune Theater in support of their tenth studio album Medicaid Fraud Dogg, out now via Clinton's own record label C Kunspyruhzy.