Emma Ruth Rundle: Fever Dreams in the Season of the Witch 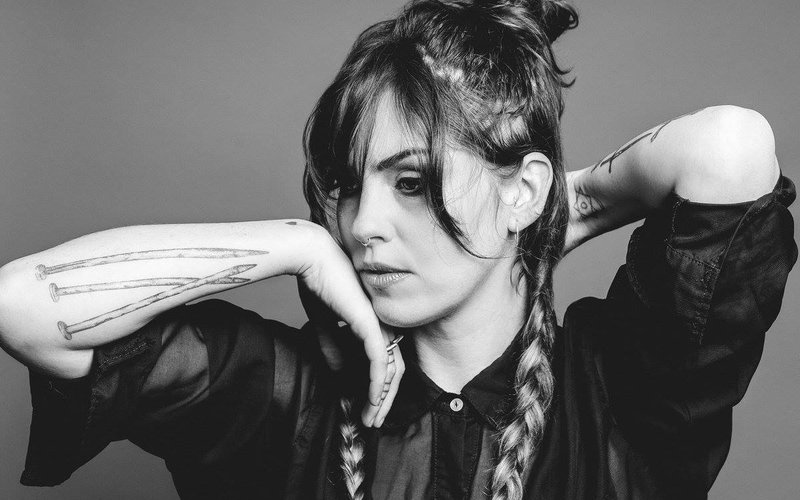 “I don’t think anything I’m doing is witchy at all,” says Emma Ruth Rundle.

I’ve just put forward a journalistic hypothesis linking her, Marissa Nadler, Zola Jesus, and Chelsea Wolfe as self-contained women making uncompromising art steeped in haunted melodrama. It’s an oversimplification, but Rundle is too kind to brush off my conjecture completely. “Marissa is a friend and Chelsea is, too. Zola Jesus, I’ve never met, but we’re playing a festival together in a few weeks.”

With tarot tapestries and books like Basic Witches for sale in Urban Outfitters everywhere, we’re witnessing a mainstreaming of the occult. Trend or not, Rundle doesn’t mind being connected to arcane female power. “It’s good company,” she allows. “It’s a unique moment, a little scene if you will. I’m happy to be associated with such lovely ladies.”

Good company is something Emma Ruth Rundle knows a lot about. Since 2008, she’s released records with the Nocturnes, Red Sparowes, and Marriages. It's her solo albums, however, where Rundle’s impassioned vocals and swirling guitars have coalesced into a sonic thumbprint. On Dark Horses (out now via Sargent House) is a career highlight — an album that marries a hazy, soft-focus mood to the artist’s most fully-realized songcraft to date.

Rundle is speaking to me via Skype from Berlin, tonight’s stop on an extensive European jaunt. She’s on the road with her husband Evan Patterson’s experimental Americana act Jaye Jayle, two members of which play in Rundle’s own live band. Her relationship with Patterson grew out of such travel. “We did a split release (2017’s The Time Between Us [Sargent House]) which was a foretelling of what was to come,” Rundle explains. “Touring that record, we fell in love and now we’re married.”

“A life spent in pieces,” she sings on album opener “Fever Dreams.” The title is a fitting metaphor for On Dark Horses’ shadowy sound. It also hints at a fractured personal history. “It’s pretty literal,” Rundle confirms. “My sister and I came from some abuse as children and a household that included drug problems, physical abuse, and mental health issues that have been genetically passed on.”

Flanged cymbals, hypnotic rhythms, plenty of reverb — descriptors like neo-psychedelia and shoegaze are easy to bat around when discussing the new record. Rundle agrees. “The album as a whole has a quality that definitely references shoegaze.” There’s also powerful ensemble playing and she’s quick to credit Kevin Ratterman (My Morning Jacket, Young Widows) for helping to achieve both the sound and performances. “We tracked as a group,” Rundle says. “That contributed to the cohesiveness of the album and Kevin’s production added that sort of softness to it.”

Central to the record are those distinctive guitar lines and beguiling vocals, leading to the question of whether she writes more as a singer or instrumentalist. For Rundle, it’s a combination.

“The roles are pretty interwoven,” she says. “I start all my songs on acoustic. From there, vocal melodies present themselves. I write all the lyrics and transfer it over to electric where I work with the band.” Still, even after completing a record, the songs continue to evolve. “Live, I’m noticing that the music is a bit heavier than it is on the record.”

Indeed, the heavy music community has always embraced Rundle as part of what she jokingly refers to as the “trifecta of Chelsea Wolfe, Marissa Nadler, and I.” She’s appeared at Northwest Terrorfest and supported King Buzzo of the Melvins. Perhaps its the elemental nature of Rundle’s music speaks to fans of that genre. “There’s a simple line that comes from playing in Red Sparowes — a post-rock band — to Marriages where we opened for Deafheaven. While my music may not be metal, I listen to a lot of it and feel comfortable in that world.”

It’s not all Rundle listens to, but the dark stuff bubbles to the top. She describes PJ Harvey and Tori Amos as being “like gods” during her formative years. “I’m also into Chris Whitley, the singer/songwriter,” she says. “His whole story and everything about that person is inspiring and fascinating. I’m kind of obsessed with him.”

Horses are another recent obsession — even Rundle’s new paintings are equestrian-themed. And then there’s the album title itself. “I wrote 'Darkhorse' for my sister,” she says. “It’s about overcoming childhood stuff, surviving and thriving despite circumstances that may have led us down a different path.” The concept flowered from there. “It was a metaphor that became a mythological character which came to life and I fixated on.”

A sense of wonder about the natural world permeates the lyrics as well. “We outshine the sun, we out-rise the moon,” she and Evan sing on “Light Song.” At first blush, the track sounds like it’s about rebirth while alluding to the pair’s romantic connection.

“There are parts taken from traditional folk wedding songs — some of the baptismal stuff about getting in the water,” explains Rundle. “It’s this blissful love song that’s ended up referencing and representing our relationship.”

A longtime Los Angeles resident, Rundle now lives with Patterson in his hometown of Louisville, KY, where they recorded On Dark Horses. The new setting suits her. “Louisville is affordable and we have a great quality of life. I couldn’t tour this much or be this productive as a visual artist and musician in LA. I’d be working two jobs.”

Directed by Louisvillian Danielle Elise Bartley, the video for “Light Song” paints their existence in dreamy hues. Rundle reveals one personal detail. “We got to borrow Evan’s Dad’s classic car which I thought was pretty cute.”

The clip and its idealized Southern Gothic atmosphere bring me back to my original line of questioning. Seeking a fresh angle, I mention that this article is set to run October 31st and inquire about Rundle’s own spooky traditions.

“I love Halloween and that subtle change in the air, the thinning of the veil between worlds,” she admits. “While my music may not be witchy, I’m definitely down with the creepy stuff.”