KEXP, Upstream Music Fest + Summit, and MoPOP have partnered together to present Mastering The Hustle: a new panel discussion with six annual events, tackling a different topic to help emerging artists make better decisions earlier in their careers. Throughout the series, we’ll be discussing everything from how to get airplay, legal and licensing, healthcare for artists, and promoting your brand.

Live performance is one of the most immediate ways to engage with music. It helps build a bond between yourself and your fans. It can lead to life-changing moments on both sides of the stage. So, how do you get booked to make it all happen? In our fourth installment of the Mastering The Hustle workshop series, we invited a panel of Seattle booking and promoting professionals to speak on the ins and outs of getting booked for a show. This series is in conjunction with Upstream Music Fest + Summit, MoPOP, and KEXP’s Artist Education Initiative< — a new program dedicated to providing educational resources for local artists.

Q Night Club and Upper Left Events’ Sean Majors shed some light on how to get your start booking and promoting events. Later, KEXP’s John Richards moderated a panel discussion with The Vera Project’s Andrea Friedman, Neumos’ Evan Johnson, as well as KEXP and False Prophet’s Sharlese Metcalf about how artists can better book shows. It’s a discussion that covers everything from what to do and not to do, giving perspective on both sides of the email chain.

How to Be a Great Booker

Sean Majors kicked things off by sharings his experiences growing up as a shy kid, moving around the country, and finding solace through DJing and booking shows. Throughout his career, he’s done shows everywhere from huge warehouses to clubs and festivals.

“If it has a dance floor and serves alcohol in the 206 or 253, I’ve played at it,” Majors said in his presentation. On average, he’s played 200 shows a year for 25 years. On top of that, he said that he’s also been attending shows 300 days a year during that same timeframe. For Majors, this is a crucial part of the process. He stressed the importance of being pathological with your work in order to succeed in booking shows – being willing to sacrifice sleep and other things in your life you could be doing and focusing on this instead.

“Are you willing to work harder than everybody who wants the same thing that you want?” he asked the crowd. Majors stressed the tenacity it takes, sharing that it took him years of failures before he started to succeed in the Seattle music scene. He attributes success as well to being willing to push yourself to go to shows out of your norm. While he started in the electronic music realm, he says that he’ll still go to Slipknot or Kenny Rodgers shows to learn and see how different genres and scenes put on their shows. Finding the sociological appeal of the different venues and subcultures is critical to finding a wider approach to doing things.

Beyond just learning from others, there’s a healthy dose of innovation involved as well. As Majors explained, if you get in a lane that’s already established and you get in line with what’s already done, you’re not saying much artistically. Much like how artists are influenced by each other but still create original works, booking and curating shows is the same way. As you continue to build trust with your audience as a curator, you’ll also be able to expose people to new artists.

Innovation is crucial to booking and Majors explains that the rules of this world are deeply affected by technology and culture. That means everything changes and can change very quickly. He stressed the importance of bands using social media and keeping it updated. He admits that it can feel tedious for most artists but is necessary for getting their work out there and helping establish themselves for bookings. He cautions bookers and artists to be aware of their own attachments, adding to stay true to your taste and goals. You don’t have to be the same thing that you found during that time – whether that’s genre or methods of booking and promoting shows. He tells both bookers and artists to fall in love with change and to be a lover of history, of the tapestry of music, but also “keep your brain loose”. When you don’t understand or relate to something, listen to it again.

It’s also important to be honest with your motivation. Whether you want to book shows to help build up a community, support the arts, make money, or just have fun, it’s important to know what your goals are upfront. He says it’s important to know your thing or combination of things. Money, in particular, can be awkward, but it’s a reality in the industry. That’s why Majors suggests getting everything in email. If he has a phone conversation with a promoter or artist, he’ll follow up with an email recapping all the points discussed so they can reference them later. The phrase “devil is in the details” is also true. By having cost breakdowns and payouts cleared up at the beginning, you’re saving yourself from awkward or tense conversations later on.

Majors stressed throughout again and again how tough it can be to make it as a booker and/or promoter. However, he did recommend that those persistent enough to pursue it utilize the resources around them. Take internships, start promoting your own events, and utilize social media. He particularly pointed out the value of finding a mentor to show you the ropes.

What Do Bookers Look For In An Artist?

Morning Show host John Richards led the panel of bookers through a series of questions to help artists navigate the booking process. Having names from The Vera Project, Neumos, Q Nightclub, and KEXP in the room meant that all those burning questions artists have had when they’re trying to get booked could finally be answered. Richards kicked things off by asking the panel what they look for in an artist. The Vera Project’s Andrea Friedman started the conversation saying she always looks for “music that’s interesting, that piques my interest. Also looking for people who are driven and nice and easy to work with.”

“My big thing is investment,” added Neumos booker Evan Johnson. “If you email me and you’re persistent and you care about the show, doesn’t matter if you’re the next Nirvana or the worst band I’ve heard in my life, you’re probably gonna be able to muster up a decent show turnout wise and it’s gonna be professional and easy to work with from a business standpoint.”

Richards chimed in to add the importance of being gracious when you’re denied a slot on a bill. Bookers remember these types of interactions and just because you didn’t get booked this time, you still may work with this same person or venue later down the road. Majors echoed this point and said that he always has an easier time when people are respectful and kind.

Putting Together a Show

Richards then posed the question of how the bookers go about putting together lineups for their shows. Johnson chimed in first, saying it’s mostly a constant act of sending emails back and forth. However, he did give some insight into artists for how they should manage their expectations, especially when they’re trying to book a stage like Neumos.

“You don’t want to play in a 700 capacity room if you’re gonna be able to bring 50 people,” Johnson said. “That’s gonna be terrible for everybody.” But it’s more than just waiting until you can bring in 700 people to book a show. Johnson noted that he’s way more interested in a band if he hears they’ve just sold out a 50 person show. The words “sold out” still carry weight with bookers, he added. It’s for this reason that Friedman says she started hosting shows in The Vera Project’s 75 person capacity gallery. It helps to create an intimate space that’s better for artists without a huge draw.

Friedman mentioned that bands should always check and see if the venue has guidelines for booking on their website (more often than not, they do). This gets back into the emailing process. Friedman says to keep your message short. You can mention some local bands you’ve played with or would fit well with and a history of venues you’ve played in the past. You might mention some of your influences, but let the music speak for itself (Richards adds: “Don’t compare yourself to Radiohead and The Beatles”). Don’t send demo CDs to venues, instead send streaming links to the booker (even better if you can embed it into the email so they don’t have to open another tab). Bookers are constantly getting flooded with emails, so brevity and ease are crucial concepts to keep in mind.

If you’ve made a template that you’re sending to numerous venues, make sure you always have the correct venue name in the body of the email – it’s a more common occurrence than you might think. Try and take it a step further and add some personal touches, Friedman says. It shows you actually care and bookers will take notice.

Patience is also key. With the sheer volume of emails bookers get, it might take a while for them to get back to you. Don’t be the band that emails every day. It’s a case where persistence won’t be your friend. KEXP’s Sharlese Metcalf says she tries to listen and respond to every email she gets, but even then she still gets numerous emails to follow up with. She says that there’s a gracious way to follow up your initial email. If you haven’t heard back in two weeks, that’d be an appropriate time to send a polite check-in email. And if you ultimately get rejected, Majors says to not be afraid to ask if there’s something you could’ve done to make your message better received.

Trying to get an opening spot for a band coming through to town is a bit more complicated than many might realize. Oftentimes, this isn’t a decision left up to the booker. The headliner typically won’t know who a local opener is and will often just bring along a smaller act that their agent also represents. For artists looking for venues to land early shows, the panel recommends reaching out to spaces like The Rendezvous, The Timbre Room, and The Crocodile’s Back Bar. When booking for KEXP events, Metcalf says it all comes down to airplay. She says it’s important to get your music into the hands of Don Yates, KEXP’s music director, or herself for local billings. 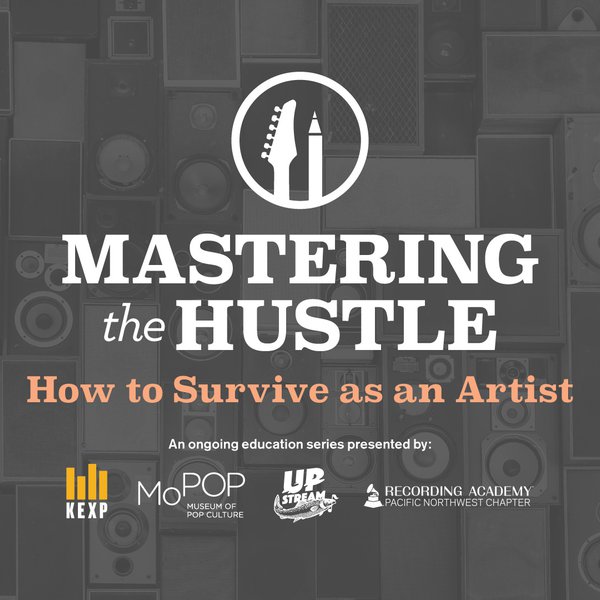 Get to Know the Panelists Speaking at Mastering The Hustle: How To Survive As An Artist (3/10) 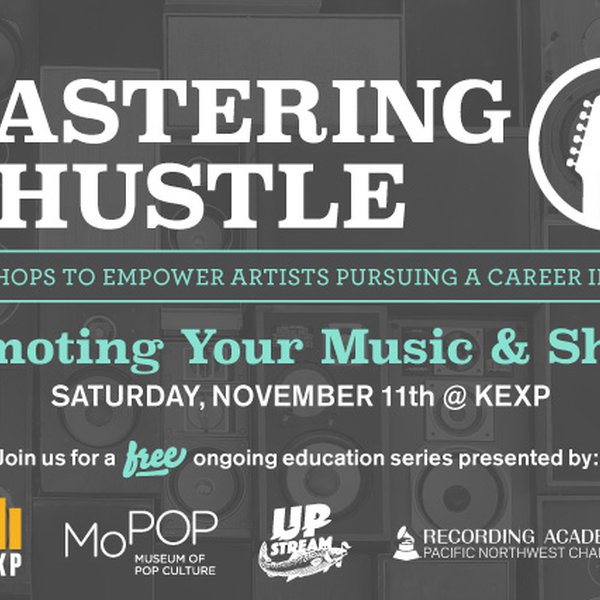 Promoting your own music can be difficult. There's the logistical side of knowing how to do it and there's an internal struggle with artists on not wanting to lose authenticity. But not promoting because of these issues is only going to cause you more problems further down the road. Knowing how to … 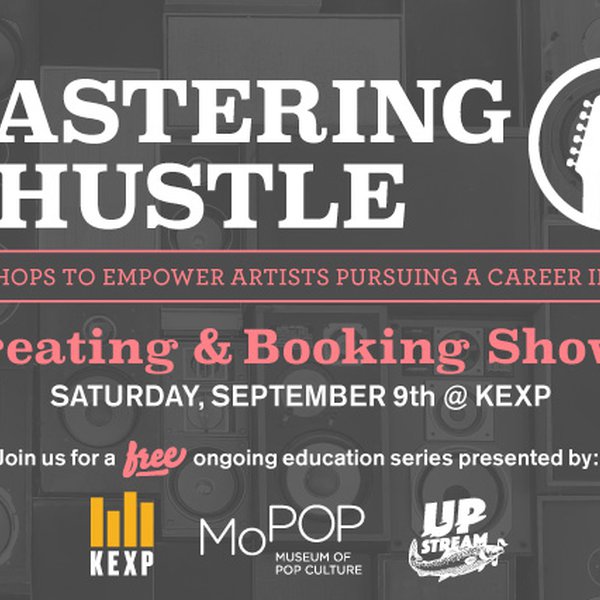 Your band has been practicing in your basement non-stop. You know your songs inside and out. Now you're ready to finally load up your gear and play a show. But where do you start? When you're first starting to play live music around town, it can be hard to get your bearings and know who to talk to,…