Over 2,000 music fans descended upon the Seattle Center's Mural Amphitheater last week -- thank you! All of you and more are invited back this Friday as we continue the Concerts at the Mural series with another killer line-up. As always, these shows are FREE and all ages, with a beer garden for those of you 21 and older. (Please note: the bar is cash only!) Gates open at 5:00 PM, so get here early, spread out the picnic blanket, soak up the sun, and enjoy.Kicking off the evening at 5:30 PM is Seattle's own Bread & Butter -- not only an idiom for someone's livelihood, but also a local power-pop powerhouse featuring former members of First Times, Wayfinders, The Vells, Broken Nobles, just to name a few. Local label Killroom Records plan to release the band's debut album this fall. In the meantime, come preview some material before it's even gone to press!

Taking the stage at 6:30 PM is Naked Giants. Was it really just last year that the band came in second place in the EMP's annual Sound-Off competition, a "battle of the bands" for those 21 and under? Since then, they've landed an opening slot on Car Seat Headrest's fall tour, plus a new EP, R.I.P., out October 14th via Miscreant Records. Seems to us, you better come see this trio before they really blow up.

And closing out the evening at 7:30 PM will be Brooklyn band Caveman, who we've been chasing around the world from a 2011 performance on KEXP from the Ace Hotel in New York City during CMJ, to a 2013 session at KEX Hostel during our Iceland Airwaves broadcast. Now we've got the boys in our town, and we couldn't be more excited! Their third full length, Otero War, just came out this summer, a concept album of sorts about a group on a deserted planet. Read the sci-fi-inspired back story here. Is it too corny to say Friday's performance will be "out of this world"? 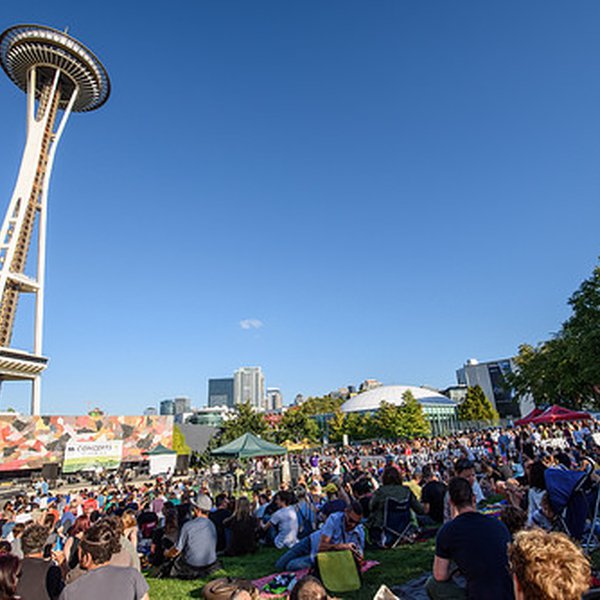 Last Friday, the 2016 Concerts at the Mural series kicked off under a cloudless blue sky. Despite the heat, The Thermals, Acapulco Lips, and Mommy Long Legs kept things cool on stage, and before long, the audience was rushing to the front of the stage to dance! If you missed it, no worries! All t... This Friday: Concerts at the Mural with The Thermals, Acapulco Lips, Mommy Long Legs

Here comes August, and KEXP and Seattle Center are serving up a tasty evening of music at the Mural Amphitheatre, for FREE! Join us for our annual Concerts at the Mural coming up on this Friday, August 5th, featuring The Thermals, Acapulco Lips, and Mommy Long Legs. Gates open at 5:00 PM, so get ...