While the Saturday lineup of Capitol Hill Block Party leaned heavily on Seattle's DIY punk and electronic strengths, Sunday was where got to see the city's pop strengths shine through. And truly, our fair city is not lacking in this department. On the Vera stage, Sassyblack put her incredible voice and production techniques on display at the absolute pinnacle of the day. With warm summer air and a light breeze blowing through the 11th street corridor, she couldn't have made the afternoon more lovely. Meanwhile, revving up the festival's final stretch at the Neumos stage, NAVVI played a dynamite set, showcasing soaring vocals and guitar with a knack for turning city skylines into dreamy pop landscapes. Of course, pop was not all there was to be found today. Down in Cha Cha, the action continued with both Sashay and Absolute Monarchs tearing it up with dual sets of blistering punk goodness. Showcasing a bright and eclectic mixture of local talent after a weekend of extreme juxtaposition, Capitol Hill Block Party's third day was a fitting end to a great weekend of music.Sassyblack has a theme song. She kicks her Vera stage set off with it, introducing herself in proper, unmistakable form. Cat Harris-White, formerly of Sub Pop experimental R&B act THEESatisfaction, finds new identity in Sassyblack, where outside of the weightiness of the highly theatrical and character-driven work of her former band, she is allowed to be an individual (one who happens to have a great theme song). Sassyblack's songs are honest, quippy, fun, and serious, all at once without sacrificing the validity of any of the other elements. Cat carries herself so lightly on stage, offering a vulnerability that exists outside of both schtick and ego - a very hard thing to accomplish in the pop sphere while still commanding the stage the way that she manages to do. Her new project, No More Weak Dates talks about dating with intention, not settling for anything less. Songs like "New Boo" talk about self respect in the midst of infatuation. But at the same time, "Comicon" talks about literally going to Emerald City Comicon and dressing like Klingons with somebody whose willing to goof off with you and have fun. The honesty and relatability of the Sassyblack project are both divine. Cat Harris-White has really nailed something here, and as she plays more and more (not at all weak) dates around the city, the people of Seattle would do best to attend and pay close attention. 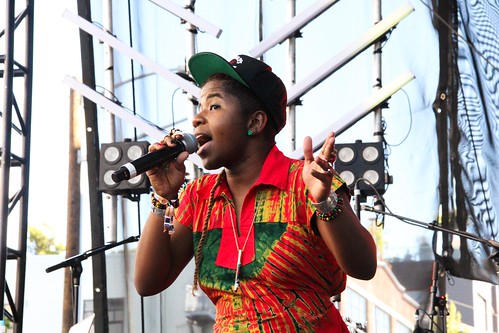 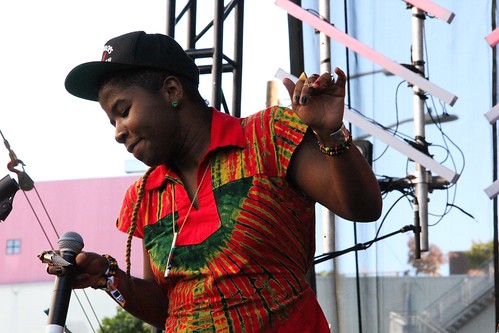 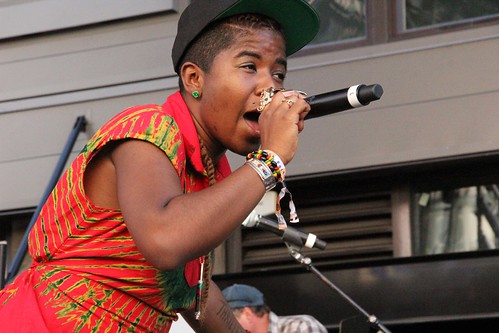 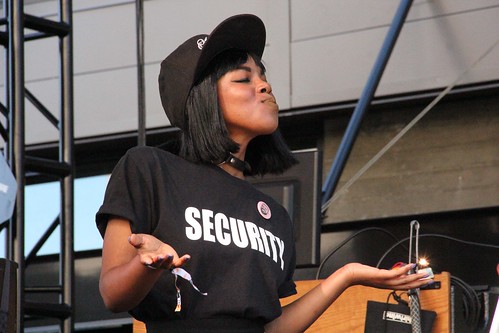 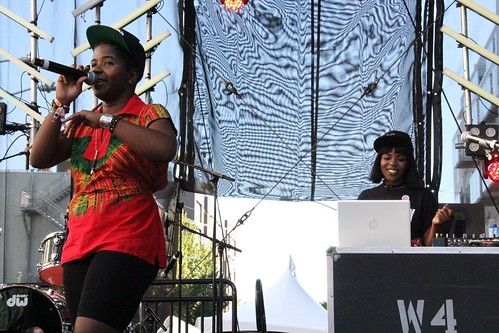 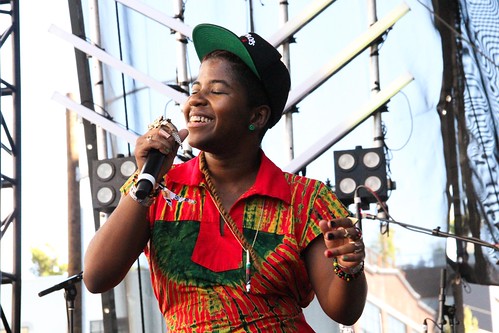 "We're Sashay" Vincent laughed at the beginning of the band's Cha Cha set, "I hope we don't get kicked out this year". I feel like you can't really do any better than that with an introduction for the Capitol Hill hardcore band (or, Grindr-core, as their Facebook so eloquently proclaims). The band doesn't really try to be incendiary or provocative as much as it seems to be second nature. The foursome play relentless punk music with a message - one of complete chaos and unfiltered free association of Capitol Hill identity. See: song titles like "America's Next Top Bottom" and "Linda Derschang Can Choke on a Burger". Vincent screams at the top of his lungs and the crowd goes wild - it's a recipe that works well with Cha Cha's $4 tallboys, regardless of the time on the clock. Sashay made the midafternoon seem like a 3am bender, and they would have it no other way. 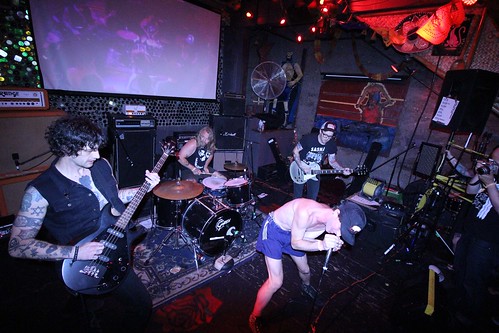 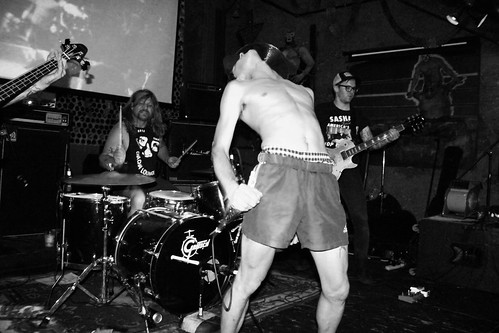 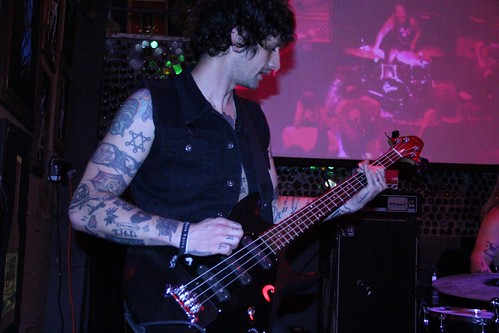 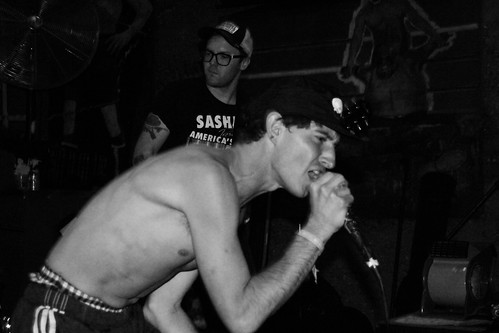 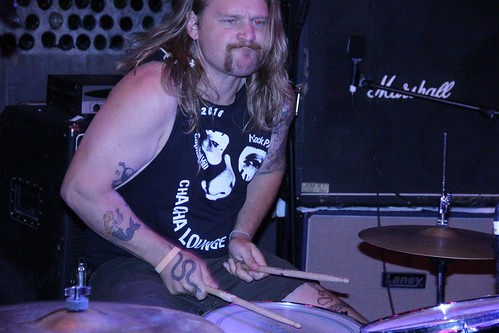 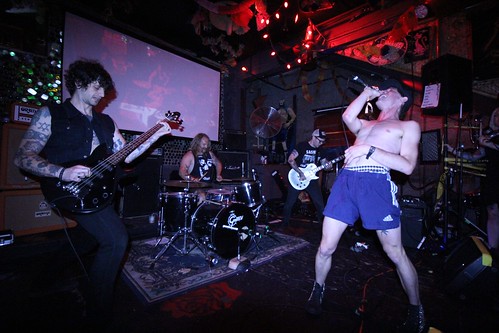 Rising Seattle electronic act NAVVI have graduated since their last Capitol Hill Block Party outing. Last time in 2014, the group was fresh off of a debut EP, playing Barboza to a crowd excited to hear tunes like "Weekends". Now, the group has a critically acclaimed full length out with Omni, making waves with singles like "Close" and mandating that the group move on up to Neumos for a primetime set right before CHVRCHES takes the main stage next door. The duo of Kristin and Brad continue to shine, showing off dialed in visuals and sultry onstage presentation, the likes of which you hardly see elsewhere for bands of this size. It's only natural that they are poised for greatness. Tonight, the band played vocoder jam "Follow You" for the second time ever live, to plenty of audience acclaim. Plus, for the unfamiliars, the band's cover of Radiohead's "Climbing Up The Walls" continues to be a great entry point, letting Brad channel his Greenwood on the guitars and letting Kristin take to the skies on the vocals. Much like the early morning city landscapes zooming past in their visuals, NAVVI kept the Sunday energy moving forward effortlessly, gliding over top of the rest of us like a dream. 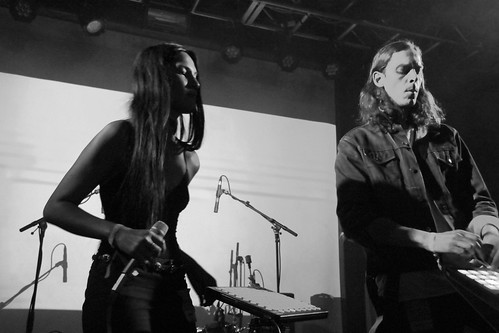 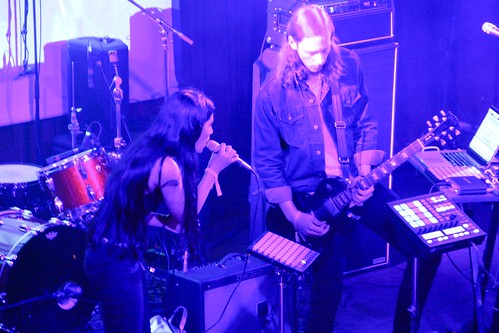 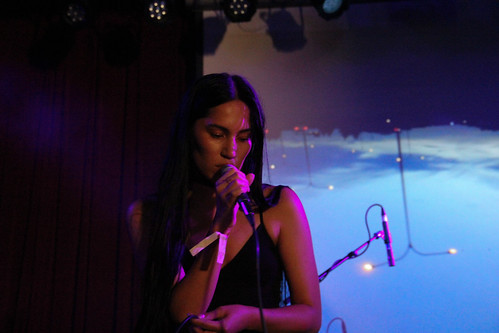 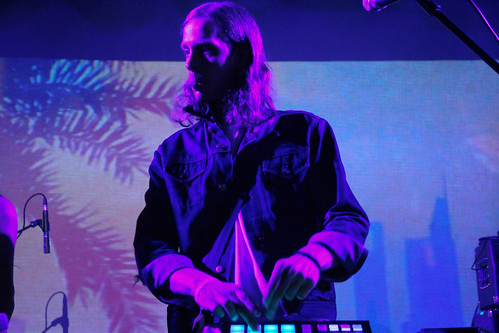 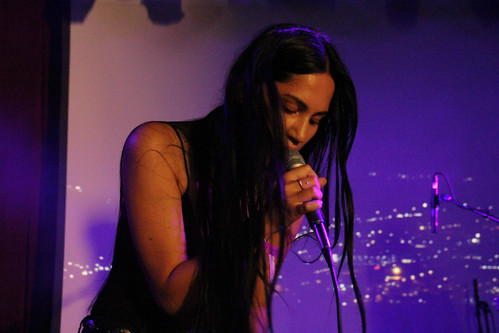 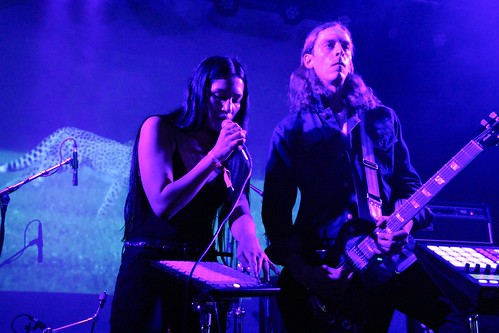 With Cha Cha's action being so ridiculously hot this weekend, it is quite a task to take the venue out on a high note. But thankfully for all of us, Absolute Monarchs were absolutely up to that challenge. They played their first ever show at the Block Party years ago, and so it only seems fitting that on this twentieth anniversary of the festival, Absolute Monarchs are the lucky punks chosen to close out the red room while never stop living in the red. The band proved their salt a hundred times over today, dragging a solid crowd down the steps once more to play great songs both new and old. Their branch of rock and roll doesn't fall far from the classics (Drive Like Jehu and Sonic Youth both sound off heavily in the fray), but that is no comment on its quality. The band put forth some seriously crunchy magic with a high frequency, and that's exactly the flavor the doctor ordered for today's closing Cha Cha ceremonies. 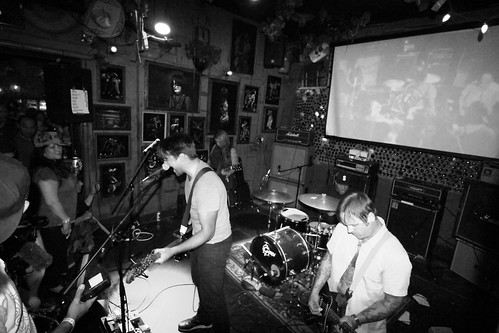 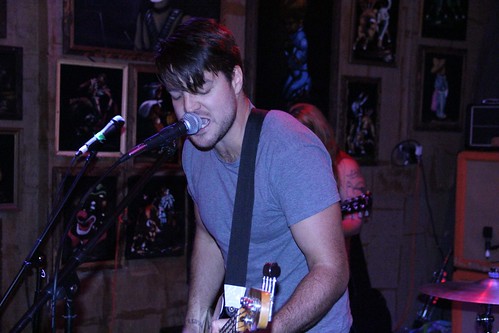 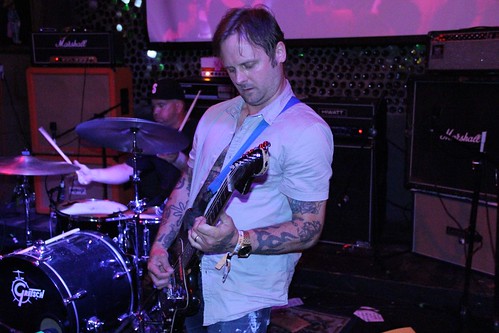 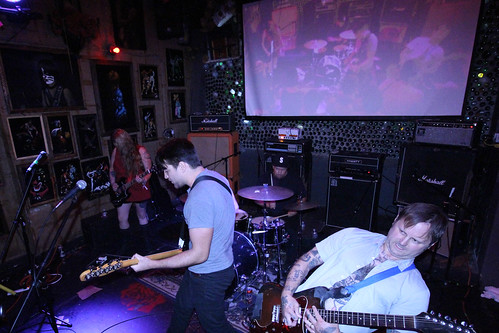 Check back to the KEXP blog for more CHBP greatness. 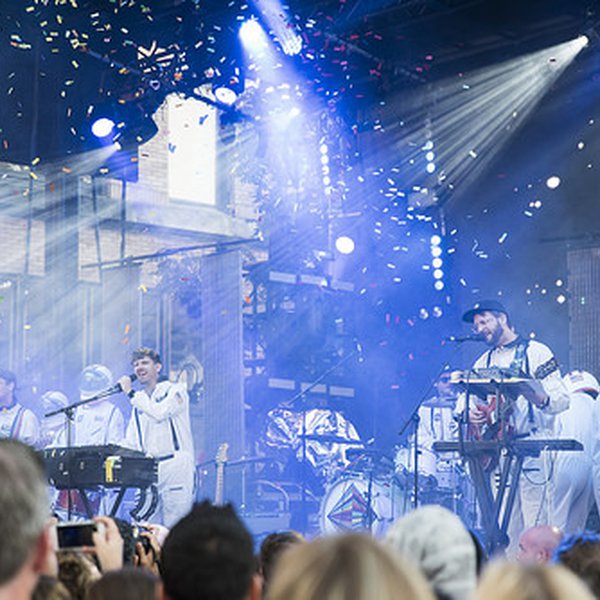 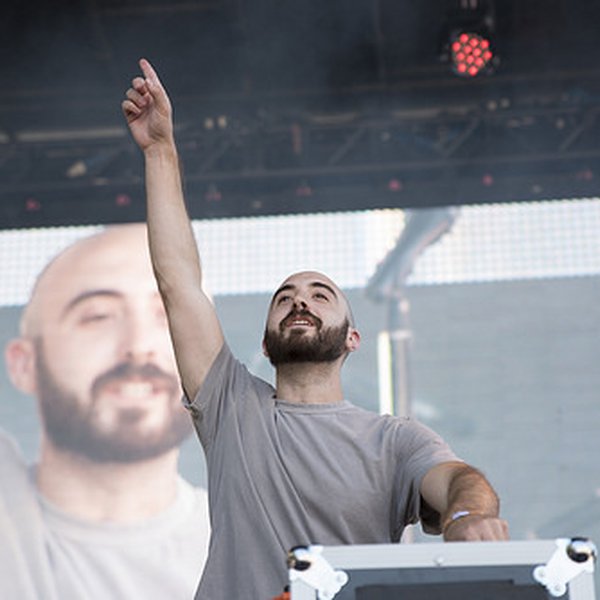 Twenty years of Capitol Hill Block Party magic is bound to bring some surprises, and some of 2016's latest additions made for some of the best events of the day. New Jersey producer and DJ Clams Casino was announced as part of the bill only about a week before the action started on Friday. Meanwhil… 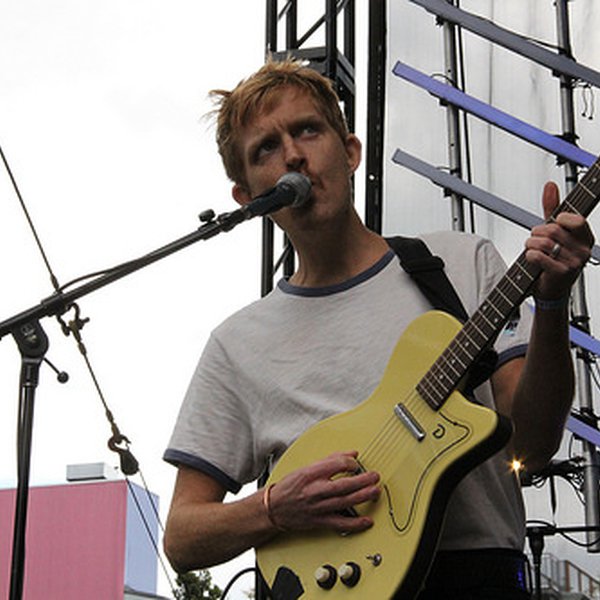