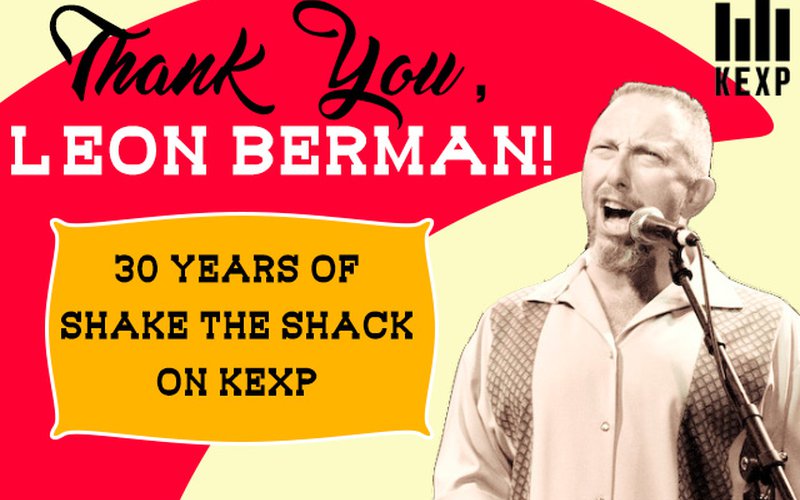 After 30 amazing years as KEXP's in-house proctologist of rock n' roll, DJ Leon Berman is stepping down as host of Shake the Shack on KEXP tonight, Friday, July 15th, and handing all surgical implements over to Cousin Mike, his faithful sidekick over many years.

Since his days at KCMU, it's truly been a wild ride by Berman's side. In an open letter to fans, he writes, "Back in 1986, Paul Aleinikoff and I came up with a Jim Beam-fueled, hair-brained idea to turn my love for announcing and my love for music into what is now Shake the Shack. Paul prompted Kerry Loewen and the powers at KCMU to take me, my music, and my off-sense of humor onboard, and pretty much turned me loose. Starting on Sunday mornings, moving to Tuesdays, Thursday briefly, and then onto our current location on Friday nights. Three turntables and a cassette player to CD players, my sad attempts at using digital laptop –- and now a digital system called Dalet. The stories I tell about using reel-to-reel tape editing makes me sound like the old guy I am."

In 2009, Leon was inducted into the Rockabilly Hall of Fame for his decades of work in the genre. He produced 25 years of the Rockabilly Ball and seven Shake the Shack Rockabilly Ball CD compilations. "A dream to bring rockabilly bands from all over the world to Seattle became a reality with the advent and advances in the internet," he explains in his letter. "Starting out with two bands on one night turning into three days of music with twenty plus bands and a hot-rod show... even between acts like Artis the Spoonman and the Juggling Chainsaw guy." 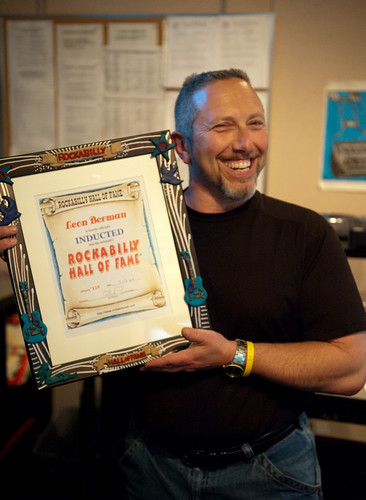 We asked Leon about some of his most memorable moments on Shake the Shack. "There are way too many to just pick a few. I would say the most memorable are nights just having fun with the Shake the Shack crew, and doing all the crazy stuff we do when we're not on air. I would also say the night my son sat in with me and took the mic like it was a natural thing for him to do."

"Another one of my favorite moments was filling the office with food for the food bank and having the listeners stop by and heckle me during my show -- especially the young kids when they see the inside of a radio studio for the first time. And every year of the Rockabilly Ball is ingrained in my brain as three days of absolute insanity and fun. It will all be in my book."

Last year, he sat down with KEXP's Station Manager Tom Mara to "retire" from the airwaves. "The decision was hard, but time spent here with my on-air family is time away from my real family," he writes. "The six hours plus a week I spend putting together Shake the Shack are very valuable hours and in the near future, my son will be playing ball on Friday nights. I’m close enough to 30 years that I can say 'I did it.. 30 years on one station' -– I have no regrets... not many on-air radio people can hang that one on their wall." Starting Friday, June 22nd, Cousin Mike will continue the shakin' with Red and Johnny on Shake the Shack.

"Leon is a radio legend and has been a part of thousands of people's lives on their Friday nights for decades," says John Richards, host of The Morning Show and KEXP Associate Programming Director. "He represented rockabilly like no one else could and was a champion of both new and old bands who had no other voice for their music. Leon will be missed not just on the air, but at the station as he was, and always will be, family. He's not just a great host, but a great person. We are a better station because of him, and we couldn't be happier for him and his decision to retire and focus on his family and life outside of KEXP."

Kevin Cole, DJ and Senior Director of Programming, adds, "As host of the Afternoon Show, I’ve had the honor of 'opening up' for Leon Berman every Friday for well over a decade. I always looked forward to seeing him, as I never knew what the hell was gonna go down -- he kept you on your toes with his infamous f’d up humor, which I promise you is way more f’d up than anything you heard on air! I also got to experience the kind-hearted, deeply caring side of Leon. And, then, there was the consummate professional -- Leon’s passion for rockabilly and radio never wavered, it was an inspiration and infectious, and probably came with an infection, too. Leon, thanks for being a champion of great music and KCMU/KEXP! We’ll miss you Friday nights!"

Leon sends these final words: "You're in very good hands with cousin Mike Fuller at the helm of the Shack. He is going to take the show places I never dared to venture. Also make sure you keep supporting the greatest radio station on the face of the planet KEXP -- there's nothing like it! One more thing -- you're the greatest listeners a radio show host could ever have... I've been a lucky bastard to be able to do this for as long as I have."