Darek Mazzone at WOMEX 15 in Budapest

This October was my first visit to the WOMEX Conference, the annual World Music Expo that happens in different European Cities with a focus on International music. Yes, I’ve been involved in the World Music scene for years and it’s a bit odd that I’ve not been before, but I always found the timing too hard to negotiate. So I was extremely pleased when everything aligned and I could attend.

It was my first time in Budapest, a city insanely rich in classical music history that recently focused its attention on its Roma/folkloric legacy. This was also an opportunity to meet with other DJ’s who focus on international music and see what we all have going on.Because Seattle and KEXP are quite removed from the world music scene, and most efforts by American radio stations, as I was warned by my good friend and mentor Jon Kertzer, are treated with a bit of suspicion or even disdain by their European counterparts, I approached my first day with no expectations. I find the lack of expectations in just about everything you do to be a good approach to just about any effort, so I was ready for surprises.

When I first booked my trip to Hungary, the refugee crisis was just becoming news, so I decided to plan my trip with a stop to Vienna and then a train to Budapest. I wanted to see what the influx of refugees especially at the train stations was causing to the fabric of the cities. I found that since this was a migration, not a stop, the impact was minimal for now. 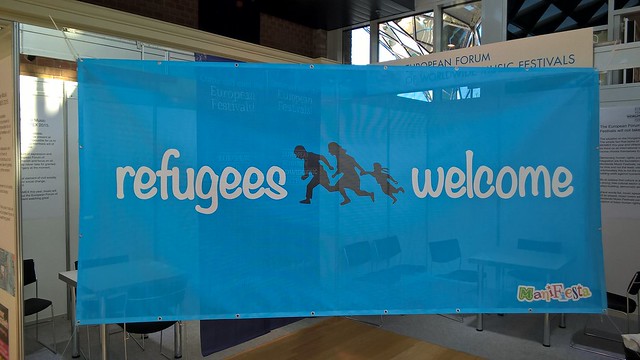 In Vienna, I was looking forward to spending time with an old friend whom I promised I would visit over 15 years ago. It took a while, but I made it happen. He’s a musician and a producer whose work I’ve loved since I first heard in the mid 90’s and his records have been a mainstay of my DJ sets ever since. It was nice to get a perspective of Vienna from Peter Kruder's point of view and to get a chance to hear the next iteration of Peace Orchestra and other works that he has on the horizon. He and his amazing girlfriend Olga took good care of me, especially as I was nursing a nasty cold once again confirming Viennese hospitality.

On my first day in Budapest and at the opening of WOMEX, I was surprised by the level of respect that world music has in the city. In the US, unfortunately, international music is either boutiqued in a kitschy silo of exoticism, or trapped in a suspended state of ethnomusicological veneration. The location of WOMEX at the Mupa Cultural Center spoke volumes about the prominence of this art to this culture.

The EXPO itself was in a intriguing egg shaped building on the banks of the Danube.

There, I found interest in international music as a living, evolving, relevant expression of what is happening now, a way to see the world and humanity through music now, in the past, and most importantly in the future.Since the bulk of the WOMEX attendees are involved in getting artists on their stages, the presentation of acts is quite ingenious. A large tent is set up with two stages at each end. When one act is done, the other starts at the opposite end and the audience just turns and see’s what’s playing. It’s a great way to see many performances and not miss anything. I was blown away as always by the level of musicianship by artists such as the great Cheikh Lo, Mamar Kassey, Clarinet Factory from the Czech Republic, 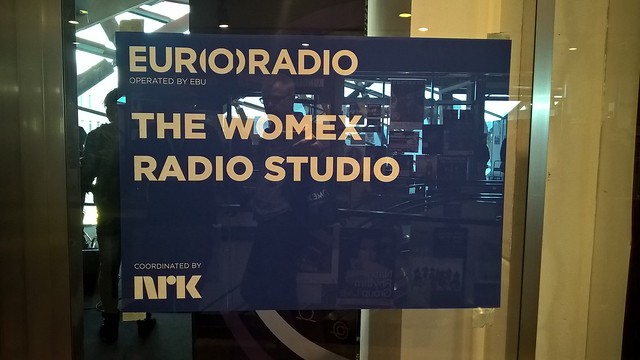 I wasn’t sure how well KEXP and Wo’Pop would have been known in this group, but to my relief we had penetrated even the hallowed halls of European world music culture. I had bands handing me records constantly and many artist had seen me in videos of the various KEXP in-studio sessions. We had arrived and in a big way. Awesome.

Jon had arranged a studio session through WOMEX Radio and a Norwegian Radio to provide us with some time to record three bands while at WOMEX. A-WA from Israel, Chouk Bwa Libète from Haiti, and Aziza Brahim from Western Sahara. I’ll be broadcasting those session over the next three weeks and you can catch them in the archive.

Seattle was especially represented well at WOMEX in 2015. Joining me was Seattle based producer Alison Loerke and STG's (Seattle Theater Group) Season Programming Manager, Jack Mclarnen, who was at WOMEX to find artists to bring to the Northwest - no small feat since we are a difficult trek for many of these artists. We are working diligently on addressing this issue, since we all agree that these artists need to be seen by as many people as possible. It's life changing.

On the last day of WOMEX, we were invited to explore the Artist Village of Szentendre, which was a one-hour train ride outside of Budapest. This was an opportunity for the Hungarian hosts to showcase local art and culture, which was lovely, and also to check out the post-folkloric sensation Söndörgö. This band made up of young players from Szentendre were playing at a local hall. The band was crazy good and it was wonderful to see the enthusiasm the audience had for their local boys done good.

You can check out Sondorgo in Seattle at Town Hall on April 8. They are here as part of the Global Rhythms series. Highly recommended. 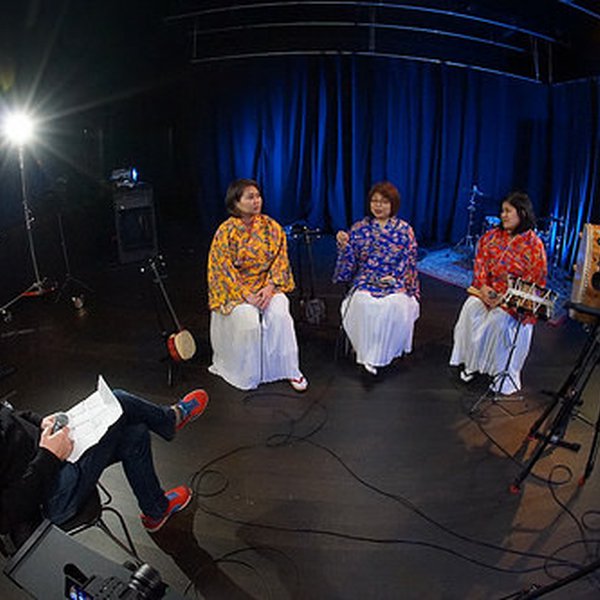 One of the cornerstones of Wo'Pop, and what has kept it a unique program is its focus on emerging global music and genres. This focus on the new is important, but you have to have context in order to make sense. Traditional music can be quickly overwhelmed by new ideas and the essence of its orig...