To know Kanye West is to love him, but to be in an endless mosh pit fifteen feet under him is something even more. It's limitless devotion to the church of Yeezus. It's agreeing wholeheartedly when Ye compares himself to Steve Jobs, Walt Disney, or, most notably, God. And in turn, much like I Am fed the Israelites with Manna from the sky, Ye has rewarded his following by embracing them as wholeheartedly as they have him. He has (mostly) forgone interviews in favor of using the stage to speak directly to his fans about what is on his mind (which has lately included eviscerating [and later forgiving] Kid Cudi, accusing people of stealing his ideas, and the merits of one's wife having Snapchat.) Aside from fancying himself as a deity/genius, Kanye has declared himself one with the people, and regardless of one's opinion of the former claim, it is hard to argue with the latter. Its floating stage augmented only by austere, saturated lighting and the presence cut by its sole performer, the Saint Pablo tour is a pioneering experiment in destroying the barrier between the audience and performer at an arena-sized level. And much like the album that the show is supporting, Ye's performance at Key Arena was a chaotic, enrapturing affair that drew its beauty from the sheer amount of chaos surrounding it. 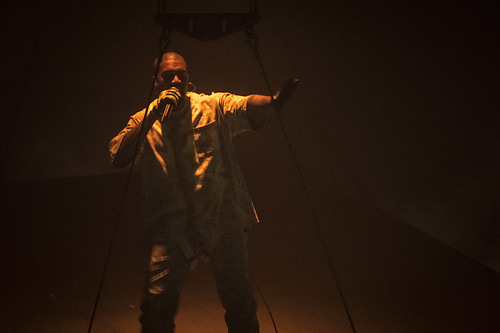 It's difficult to imagine Kanye making a bad album because it's even more difficult to imagine Kanye making a boring album. And while The Life of Pablo is by no means a bad album, it is certainly a mess, but a fascinating one nonetheless. (One could certainly argue that it's Kanye's worst album, but if that's true, it's still miles ahead of the work of his contemporaries.) Likewise, there is no such thing as a bad Kanye performance because Kanye is seemingly incapable of being boring. And in Seattle, he was anything but boring. It only took two songs for him to stop the crowd to reflect on the significance of his lyrics (he was, of course referring to that line involving Taylor Swift) and only about ten more minutes for him to create the next day's headlines. (You know the one.) All of this and more while he was on a suspended platform over a perhaps indefatigable mosh pit that started before Ye (or his live musician/secret weapon Mike Dean, rather) had even played a note. It's hard to describe what makes the staging for this show so brilliant without mentioning the way the audience interacted with it. There wasn't a sign on the bottom of Kanye's floating platform instructing the fans on the floor to lose their damn minds, but they did it anyway. It's a beautiful thing to see a mosh made up of punks going at the Black Lodge or Neumos. It is an entirely different, almost bewildering sight to see a bunch of kids, dressed in clothes that cost enough to pay a month's rent (in Seattle!), risking scuffing their Yeezys and smashing their iPhone 7s to throw each other around while Kanye West shouts above them. But then again, what the hell else would you do if one of the greatest hip hop artists of all time - not hyperbole - was above you speaking his truth. A truth that's completely foreign to most of the audience - something tells me Kanye was one of maybe, if Paul Allen was in attendance, two people in the arena with a private jet - but one that resonates nonetheless, especially when there's essentially no barrier either in sight, for those seated in the bowl, or in presence, for those on the floor. 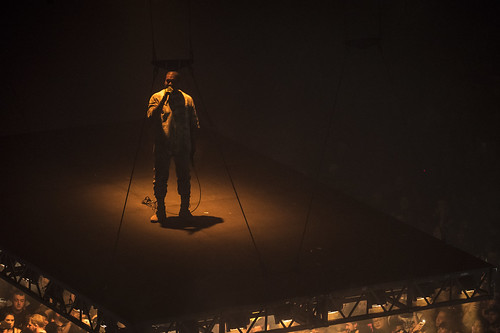 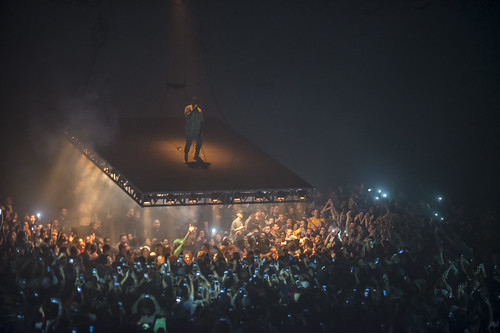 And while there was more than enough pure, unadulterated spectacle that night to last until the next time a megastar on Ye's level comes to town, the night's setlist was also crucial to creating the tour de force of a performance. Where the previous tour, 2013's jaunt behind Yeezus, was highly conceptual and narrative-based, Saint Pablo is very much not. The game plan for this tour probably didn't amount to much more than "let's put Kanye on a floating stage and have him pump out as many bangers as he feels like each night". It's a far cry from most of his previous productions, but hell, did it work. When Mike Dean dropped out the backing track for any of Ye's hits - which he did frequently, starting with the very first song, in an act of glorious hubris - the audience took over handily. The setlist was 75% hits (everything of note, save for "Gold Digger"), 20% pseudo-ballads (A relatively short [read: seven minute] "Runaway", and his best McCartney collab, "Only One"), and 5% off-the-cuff banter. Just as performing something as racially-charged and angry as "Black Skinhead" in an arena full of mostly white people is striking, hearing everyone lose their collective minds one bar into "Touch The Sky" is an instant highlight, one that will live on the Twitter feeds and Snapchat stories well after this tour has ended. 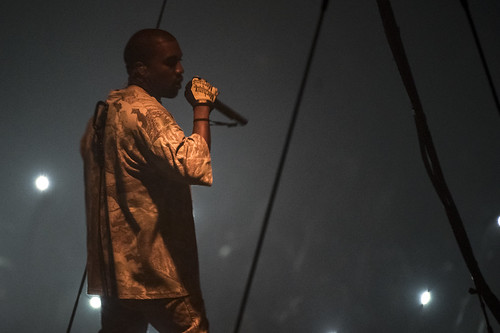 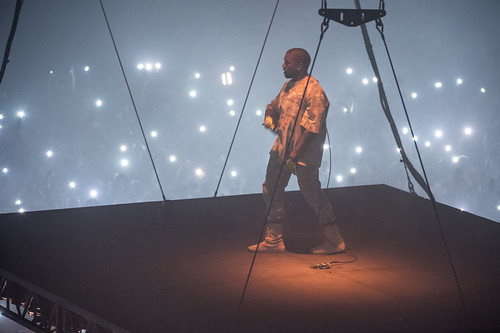 But that's what releasing no fewer than five indisputable classics in just over a decade will do for you, though. Kanye's only been playing against himself for some time now, but he despite his seeming preference for fashion as his main art form, his increasing familial duties, and an comical (but almost sublimely so) album rollout that was either a complete disaster or a piece of art in itself, he has yet to make a significant artistic misstep. And while it's not particularly well advertised, it's hardly a secret that around 2010, Kanye shifted from being a one-man musical army to the leader of a think tank. But on this tour, there's only one figure cutting through the heavy, minimalist bronze lights, and he is a God dream. 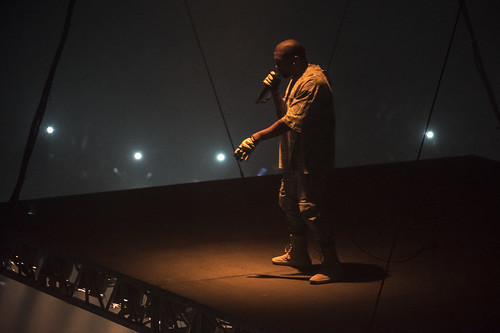 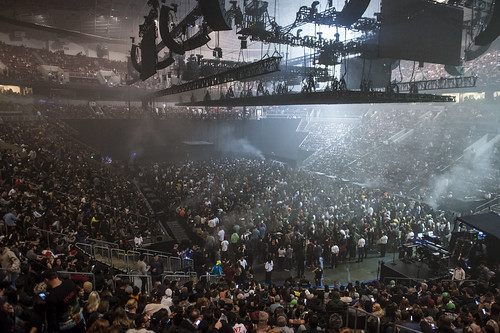 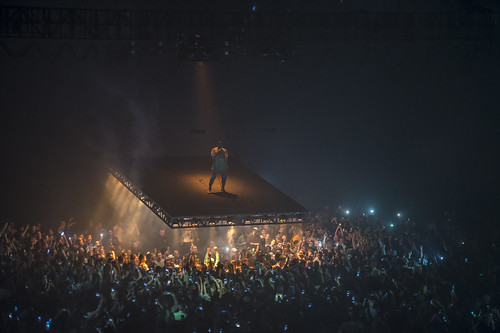 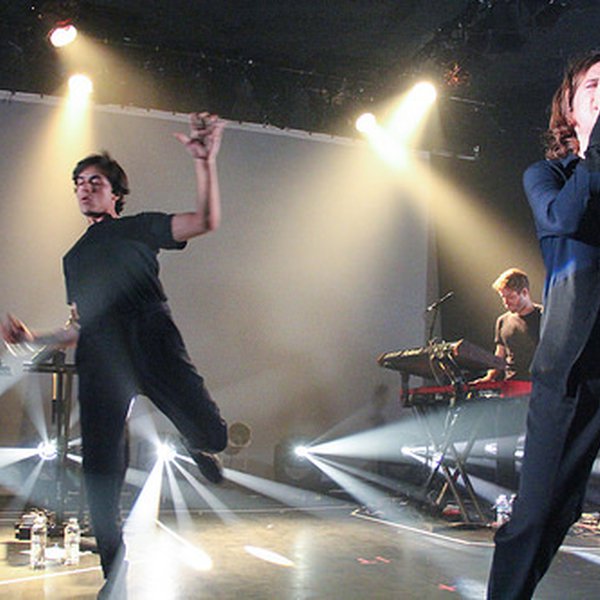 Live Review: Christine and the Queens with Lemolo at Showbox at the Market 10/19/16

"You're born naked and the rest is drag." That's one of several RuPaul quotes that Héloïse Letissier has written on her wall, and it encapsulates, in such fitting form, the spirit of her musical identity as Christine and the Queens. A stage identity apart from herself, Christine is a reflection o...

Live Review: Black Rebel Motorcycle Club and Death From Above 1979 with Deap Vally at Showbox SoDo 10/20/16

"How about this?" Julie Edwards screamed from the drum set halfway through Deap Vally's set, "Black Rebel Motorcycle Club and DFA 1979! This is the friggin' rock n roll circus man!". Edwards remark couldn't be more true - truly, tonight's sinfully good double feature is a match made in heaven. At...