Scribes Sounding Off: Time for the 2015 EMP Pop Con! 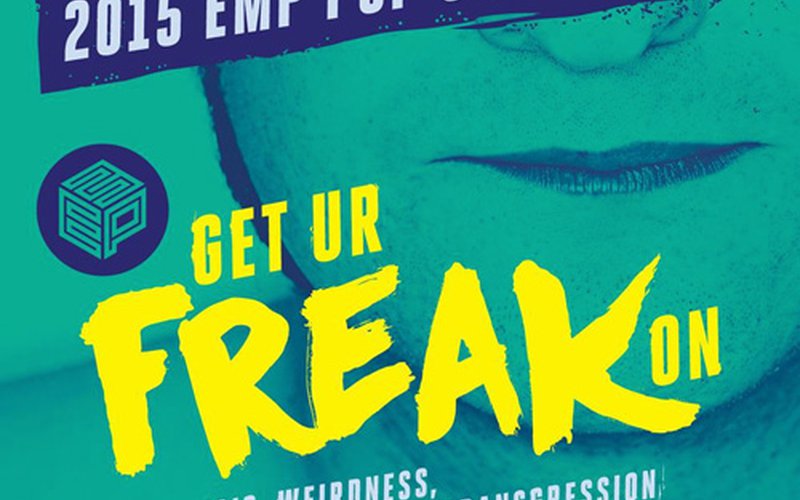 Yes, it’s about to occur again: The Experience Music Project’s Pop Conference, where the best minds of our music journalist generation melt into a whorl of theory, debate, fussy details, bold assertions, bizarre reveals, and loving feels. Papers are given by salty academics, biz workers, scribe-nerds, collecting heads, obsessive scholars, and even musicians themselves (which could also be any of the above, and often is).

This year’s theme-topic is Get Yr Freak On: Music, Weirdness, and Transgression. It runs at the EMP in Seattle from the keynote on Thursday, April 16 (“Can Pop Really Be Transgressive? Poptimism and Its Discontents”), then all day the 17th and 18th, morning till night, with a few papers still be giving out through half of Sunday the 19th. It’s bigger and bolder, and, yes, more bad-ass this year than it’s ever been. That means, more programming, more panels, and extra-awesome events like a concert by TacocaT, Chastity Belt, S, and Childbirth on Friday, April 17. Read more about the specific Pop Con schedule and special concert here.

Two of the people who will be moderating and presenting at the Pop Con this year include Jessica Hopper and Robert Christgau, both of whom have put out new books out that are both very well worth your time.

Pitchfork Senior Editor Ms. Hopper’s book is an excellent career-length assortment of tough reporting and sharp criticism about underground rock, the moral problems and paradoxes with pop success, and everything from how venues work to the weirdness of festivals and specialized tours. Drawing from her many years of published work in everything from SPIN to the Portland Mercury, the Chicago Reader to Village Voice, and her own blogs and fanzines, The First Collection of Criticism By A Living Female Rock Critic is one of the very best music books of the year (actually, of any year). Articles on many favorite KEXP bands such as Dinosaur Jr., The Raincoats, and M.I.A. are in here with marvelous extrapolations about the meaning of mainstream hip-hop; and pieces such as the in-the-moment analysis of emo-misogyny of the early 00s reveals her ferocious thirst for justice. It is in itself a great guidebook for young scribes of how to write about music, youth culture, and the strange temptations and tragic compromises artists make to find their place with fans and a sick and spinning industry. It’s exciting to see a singular volume of her features, which stands up with the superb work she does on the truly sublime Pitchfork Review — though I would have loved some more of her outstanding longer reviews, advice columns, and a few more of her fanzine rants reprinted as well. (Maybe in Volume Two?)

Robert Christgau is always a major highlight of the Pop Conference, and like Jessica, he will be back again this year. This is also a very special year for Mr. Christgau fans, as Dey Street Books has recently published his long-awaited memoir, Going Into The City: Portrait of a Critic as a Young Man. Like the man itself, it is a treasure of shrewd musical assessments, bawdy boasts and reveals, raging criticisms of cultural targets and passed-along notions, boundary-crossing asides, and terrific bawdy humor. This is where you go to find where The Voice began with music-writing — he’s the strongest soldier of the early guard left, still standing and taking it all in. His salty, occasionally scabrous seemingly-freestyle writing confuses some younger (or shallower) folk who don’t understand how much rock journalism-pop music criticism was originally tied into the voracious appetites and cultural biases of the reviewer. And that hunger included love for city living, film awareness, relational highs and woes, things that are absorbed and reflected through assessing what’s on the turntable. Mr. Christgau is very personal here about his long-running romance with his wife, and deep and awkward friendships, but also includes his first hand accounts of major rock festivals, the changing of New York, the bellwether-outsiders of mainstream pop music, and the still-continuing upheaval of punk and post-DIY aesthetics. A must-have in any music writing fan’s book collection.

Mr. Christgau presents at the EMP Pop Conference during the “Insider Outsider” panel on Friday, April 17, which is held from 9:00 AM to 11:00 AM at the JBL Theater.