Beginning as a student and volunteer-run 10-watt radio station in 1972, KEXP has grown over the years into an innovative, influential cultural force in the Pacific Northwest community and beyond.

Following the new partnership agreement with UW, ownership of the FCC broadcast license for KEXP-FM Seattle is transferred to Friends of KEXP. KEXP is now recognized as an “affiliate” of the University of Washington. Construction on KEXP’s New Home begins. KEXP’s YouTube channel reaches the milestone of 500,000 subscribers.

KEXP is offered the opportunity to explore relocation to the Northwest Rooms at Seattle Center, adjacent to Vera Project and Key Arena. A renewed partnership with the University of Washington enables the UW and KEXP to better achieve their public service, non-commercial missions of extended and enriched outreach, education, music appreciation and related technological innovation.

KEXP submits a bid to occupy the former Fun Forrest site at Seattle Center, which was ultimately unsuccessful. The site is now home to Chihuly Garden and Glass.

KEXP now has 13,000 annual donors, and over 200 business supporters. Visioning sessions for a new home for KEXP begin when it becomes clear the the lease cannot be renewed beyond 2015. KEXP launches the Concerts at the Mural series in partnership with Seattle Center, and begins posting in-studio performance videos to its YouTube channel.

KEXP-FM boosts its transmitter to 4700 Watts, with a signal now reaching most of King County west of Issaquah. KEXP launches the KEXP Blog, dedicated to album reviews, upcoming event information, concert photos, and other music-related writing and photography.

KEXP.ORG wins the Webby Award for Best Radio Website. KEXP.ORG was nominated in the same category in 2003, but failed to win the award. This great honor comes only a few months after the launch of the newly redesigned website. KEXP launches the first ever full song podcast, the KEXP Song of the Day Podcast.

KEXP launches the first-in-the-nation 14-day streaming archive, making it possible for listeners to access any program broadcast in the previous two weeks on-demand.

KCMU becomes KEXP 90.3 FM, maintaining all staff, the same format and frequency, while almost doubling its wattage from 400 to 720 and moving to a new technologically-advanced studio at 113 Dexter Avenue in downtown Seattle. The first song played at the new facility is Iggy Pop’s “Lust for Life.” KEXP now has 105,000 weekly listeners. KEXP-FM is operated by a newly-formed 501(c)3 nonprofit arts organization, Friends of KEXP.

KCMU started streaming 128 kilobit per second mp3 compressed audio over the Internet 24 hours a day, seven days a week. This made KCMU the first station in the world to offer online audio of this quality. KCMU moves across the UW campus from its long-time home in the Communications Bldg. (CMU) to Kane Hall. KCMU averages around 56,000 listeners per week, with the support of 2,800 annual donors. 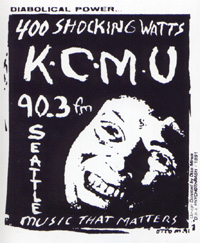 The station moves to 90.3 FM while relocating its transmitter to Capitol Hill and boosting its power to 400 watts. The station's range is extended 15 miles.

KCMU expands its musical focus by adding a variety of other styles to its regular modern rock programming, including hip hop, roots and blues, world music, reggae, jazz and more.

The station's wattage increases to 182 watts, allowing the station to be heard outside the University District. Artist interviews & select live in studio performances are introduced

University budget cuts demand the station look to the community for support. The station adopts a modern-rock format and begins raising funds from the community.

KCMU was founded by a group of University of Washington students, John Kean, Cliff Noonan, Victoria ("Tory") Fiedler, and Brent Wilcox. The station broadcast a 10-watt signal on 90.5-FM, programming an album-rock format. The station's 10-watt transmitter is located on top of McMahon Hall on the UW campus. The call letters KCMU referred to the stations first home in the station, the University of Washington’s Communications Building, which is known as “CMU.”